Although not rivals, the Porsche Panamera Turbo S and Ariel Atom are both blisteringly fast cars 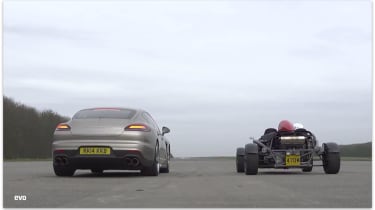 The Ariel Atom and Porsche Panamera, are about as different as two performance cars can possibly be. Why drag race them? It’s an interesting comparison, because while the Porsche is significantly heavier than the Ariel, it has almost twice the power.

Ariel’s 550kg Atom is about as extreme as road-legal cars get (with the possible exception of a few). Designed primarily with track use in mind, there’re little practicalities to get in the way of its face-melting performance. Power comes from a supercharged version of the old Honda Civic Type-R engine, which produces 310bhp. During the test, we figured the Atom at 3.25secs from 0-60mph, and just 7.07secs from 0-100mph.

At 1995kg, the Porsche Panamera isn’t far off four times the weight of the Atom. It does however boast 543bhp from its 4.8-litre V8 petrol engine. With four-wheel drive, there is also no problem with traction off the line. We recorded a 0-60mph time of 3.66secs – just 0.4secs off the time of the Atom. At 100mph it is another second behind at 8.45secs. Over 100mph however, the Porsche has the upper hand, gaining on the Atom surprisingly quickly. By the time the Atom reaches 150mph, it has crossed the 1000m finish line, with the Porsche trailing by just over a second.

Although the performance difference is closer than you might initially think, the gap on track would undoubtedly be much wider. The effect of massive power and weight differences can be seen in our recent Track Battle, which pitted the Porsche Cayenne Turbo S against the Caterham Seven Supersport at the Bedford Autodrome. Even with a humungous power deficit, the flyweight Caterham lapped the circuit significantly quicker than the Porsche.