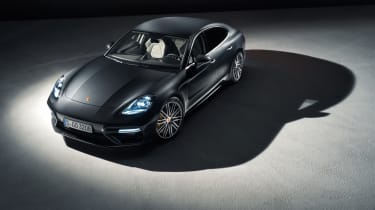 The new Porsche Panamera Turbo has managed to beat the Alfa Romeo Giulia's Nürburgring lap time by just one second, making it the fastest four door saloon to lap the circuit.

With 542bhp and 563lb ft from its all new twin-turbo V8, the Panamera Turbo is a significant step up from the Giulia's 503bhp and 443lb ft V6. It also incorporates the rear wheel steering seeing in the 918 and 911 Turbo, which no doubt contributed to its 7min 38 sec lap time.

What's most impressive though is that the Porsche managed the lap time despite tipping the scales at 1995kg. For comparison, the Alfa Romeo Giulia Quadrifoglio weighs 1524kg. 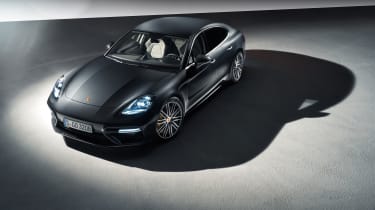 The new Panamera Turbo represents a drastic depature from the old car, both in design and the technology on offer. Porsche has rapidly played catch up with the competition via a completely new gadget-laden interior, complete with two 7-inch displays.

But it's the chassis technology that no doubt helped contribute the most to that Nordschleife lap time. We've already mentioned rear wheel steering, but also of note is the Panamera's PASM action suspension management, enhanced PDCC chassis control and more advanced torque vectoring. The new Panamera also has active roll stabilisation.