New Panamera features sharp new look inside and out, and more powerful engines 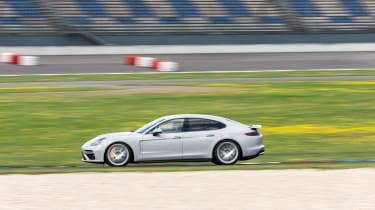 Porsche has revealed its all-new Panamera four-door super saloon, with a refreshed new look, a tech-laden interior and new, more powerful turbocharged engines fitted with a new eight-speed PDK transmission. Oh, and a 7min 38sec Nürburgring lap time, two-seconds quicker than a 997.1 GT3. Available to order now, the new Panamera will go on sale this autumn.

The new Panamera will initially be available with three engines consisting of two Porsche designed and developed turbocharged petrol engines – a 2.9-litre V6 and a 4.0-litre V8 – and an Audi sourced 4.0-litre V8 twin-turbo diesel. A plug-in hybrid will also join the line-up early next year. 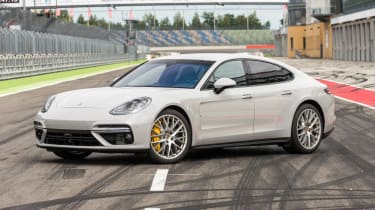 Fitted to all three engines will be a new eight-speed PDK transmission replacing the current seven-speed double-clutch gearbox, and from launch all Panameras, including the diesel, will only be offered with four-wheel drive, with rear-wheel drive variants scheduled for launch later in the year.

As well as more power, new engines and a new gearbox the 2017 Panamera also gets a new platform and look. Sharper than its predecessor, Porsche’s designers have worked hard to eliminate some the dumpiness that hampered the car’s look in the past.

> See the old Panamera GTS take on the Audi RS7

The new Panamera is 35mm longer at 5050mm, thanks in part to a wheelbase that has increased in length by 30mm to 2950mm. The new car is also 5mm wider at 1935mm and 5mm taller at 1423mm, although the rear roofline is 20mm lower to retain Porsche-like coupe look.

There are new bumpers, side sills, wings, roof, bonnet, rear hatch and the retractable rear spoiler is larger on both S and Turbo models. The Panamera also features a 911-esque LED light strip running between its taillights and LED matrix from headlights featuring 48 individual LEDs.

Every external body panel is made from aluminium with the single piece side wall of the car hemmed to the steel shell, a first of its kind in the automotive sector. It will be built, in its entirety including the manufacturer of the body panels and shell at Porsche’s Leipzig factory.

This new Panamera platform is a fully modular, using the VAG pioneered MSB platform, with a long wheelbase model scheduled for launch in early 2017 and a further four applications in the pipeline including a sporting brake and a coupe-SUV. The next generation Bentley Continental GT and Flying Spur and Audi A8 will also utilise the Panamera’s platform. 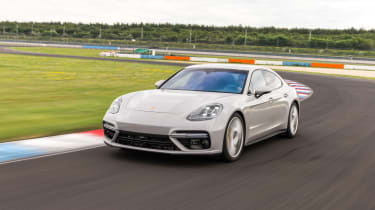 The body-in-white of the new car weighs 335kg, and went a long way to contribute to the 70kg overall weight saving Porsche’s engineers had to find to compensate for the additional weight the car’s new technology has resulted in.

Active aerodynamics play a significant role in the Panamera’s new found efficiency, with active planes incorporated behind the front bumper to either close and prevent airflow into the engine to reduce drag, or open when required to cool the engine. Airflow has also been optimised under the car and the Turbo’s active rear wing has two settings, one specifically to maximise economy the other to reduce lift and increase aero performance at higher speeds.

Inside the new Panamera is where you will recognise the biggest with clearly recognisable design elements first seen on the 918 Spyder with what Porsche calls Porsche Advanced Cockpit.

All the tradition hard buttons have been replaced with touch sensitive ‘buttons’ on a glass-like surface or migrated to the central 12.5-inch touchscreen. The temperature control buttons for the climate control are a solid knurled aluminium effect rocker switch, the vents are controlled via the touchscreen and the controls for the PSM, PASM and sports exhaust still have their own easy to find, single use button. They may have the appearance of being touch buttons, but these dynamic switches operate by your finger depressing and vibrating when the required action has been completed.

Within the 12.5-inch main screen is every control function for the car, even those with individual switches elsewhere in the cabin. The main screen can be split 30/70 and configured how you wish allowing you to operate music, sat-nav, telephone, car and climate settings accordingly. 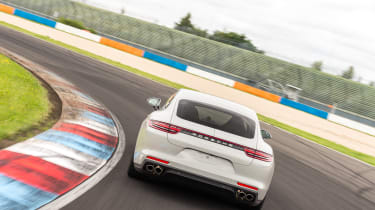 The two 7-inch displays positioned within the instrument binnacle flank a separate traditional analogue tachometer. Each of these displays features two smaller screens that can be configured to replicate the content on master screen as well as being home to the digital speedo, engine gauges, cruise control functions and trip computers.

With the new Panamera Porsche is introducing what it calls InnoDrive, which takes its Automatic Cruise Control function to near autonomous levels of driving. Using the data from the sat-nav and the camera from the radar cruise the system reads the road for the next 3 kilometres and sets the car up accordingly in terms of the correct gear and engine speed. You still have to steer the car but you can guarantee the system has been future proofed for full autonomous driving.

As with the previous generations of Panamera the new car is stacked with chassis technology. Porsche Active Suspension Management is standard on all models with air suspension standard on the Turbo. Porsche’s latest Dynamic Chassis Control Plus and electro mechanical steering is now available, the former an option the latter standard across the range. For the first time Porsche’s rear-wheel steering pioneered in the 918 Spyder and 911 GT3 RS will also be available on a Panamera for the first time.

PDCC Plus is a further development of the electro-mechanical active anti-roll bar system, which can now also disconnect the roll bar completely for increased comfort. 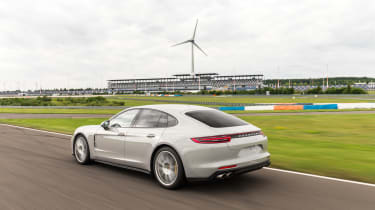 With its electro-mechanical steering taken directly from the 911 Carrera Porsche claims it’s as direct and responsive as the sport’s car, and if you specify the optional rear-wheel steering it’s more direct still.

Three different brake options are used on the new Panamera. The V6 and V8 models both have six-piston calipers, with the V8 using a larger 390mm disc, while the optional PCCB ceramics have the 10-piston calipers first seen on the Cayenne Turbo S and a 410mm.

Both petrol turbo charged engines are new for the Panamera, designed and developed in house by Porsche. The range of upgrades is far reaching from new construction techniques, cylinder deactivation for the V8 and injection system for the V6 and a new exhaust system for all models.

A feature of both the petrol and the V8 twin-turbo diesel engine is the positioning of the turbochargers within the centre V of the engine, between opposing banks of cylinders to improve throttle response, torque delivery and reduce emissions. Porsche didn’t feel the need to use electric turbos as the regular units delivered the performance targets required. Expect them on the face-lift model in four years time.

The new 4-litre V8 is a modular engine (the V6 is the same unit but with two-fewer cylinders) and will be made available to other brands within the VW Group. To this end, expect it to appear in the new Bentley Continental GT and Flying Spur and Audi’s top end models, such as the next RS6 and RS7 and A8 models. It will also be used in the all-new Cayenne. 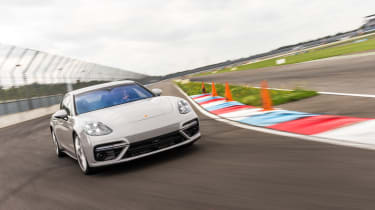 Both the petrol engines use twin-scroll turbos that work in unison, while the V8 diesel’s turbos (a Euro6 compliant version of the same engine found in the Cayenne S Diesel) are sequential, with the second turbo only active at engine speeds above 2700rpm.

Performance has improved across the board for all new Panamera models, with the 2.9-litre 4S reaching 62mph in 4.4sec and topping 180mph, the 4S Diesel will crack 0-62mph in 4.5sec and the Turbo will complete the benchmark sprint in 3.8sec and top 190mph.

Also new to the Panamera is an eight-speed PDK double-clutch gearbox. Developed in conjunction with ZF, the unit has six conventional gears with the seventh and eighth used as overdrive gears. Transmission losses have been reduced by 28 per cent over the old seven-speed unit and it now features four-shafts instead of two and the latest shift-by-wire technology. The shift speeds in Sport Plus mode are on a par with those in a 991 GT3.

Riding in the Panamera

We’re still a few weeks away from driving Porsche’s new saloon, but we have been in the passenger seat for a handful of hot laps at the Lausitzring in a Panamera Turbo. The first thing that strikes you is how clean the new interior is, so much so that you almost miss the sharper, cleaner more muscular lines of the exterior, which features a rear very much in keeping with a 991 than before.

The touch sensitive display is quite intuitive and within a few days an owner will soon have there preferred preferences for the display in place. The new lighter seats, the four combined save over 8kg, are firmer and more 911 like in how they hold in you place. Which is useful when you’re subjected to launch control. 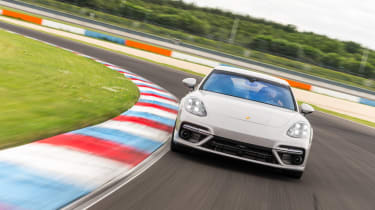 The V8 twin-turbo has a deep bass-line to its soundtrack, it’s not as angry or OTT as Mercedes-AMG’s similar hot-vee turbo engines, but it appears to go about recalibrating your thoughts on how a fast, luxury car should accelerate in the same way.

On track the only real feedback you can gain from the passenger seat is just how impressive the optional 10-piston PCCB brakes are. Retardation is not an issue, from over 230kmh it will hit 90kmh in a blink without a squirm from the chassis and just the odd complaint from the tyres. But at all times the body remains controlled, the steering inputs kept to a minimum.

Porsche Traction Management doesn’t appear to allow you to play to much with swing angles, but for a 5-metre long, near 2000kg four-door, four-wheel drive saloon car it feels as impressive from the passenger seat as the outgoing car did from behind the wheel.

Once the initial launch phase is out of the way, Porsche will introduce rear-wheel drive models as well as V6 diesel engine, plug-in hybrid and a more powerful Turbo S model along with a GTS. And expect further body derivatives to follow soon after.