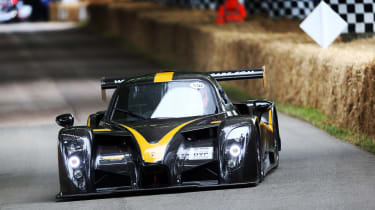 Some choose to launch cars under the glittering lights of a motor show stand. Others make surprise appearances at non-automotive events. For Radical, the active arena of the Goodwood Festival of Speed was the perfect place to demonstrate a one-off special edition based on the hardcore RXC Turbo.

The RXC Turbo 600R 20th Anniversary celebrates both the maker's eponymous anniversary and also its 2000th car produced in that time, and boasts even more extreme figures than the Turbo 500 we pitched into a head-to-head with the BAC Mono 2.5 earlier this year.

Power from the twin-turbocharged, 3.5-litre Ford EcoBoost V6 engine is now up to 650bhp, while a six-speed Quaife sequential transmission is charged with delivering that power to the rear wheels through a set of Dunlop Sport Maxx tyres. The drivetrain needs to push along just 1130kg, for 575bhp per ton - and a 0-60mph time of 2.7 seconds. 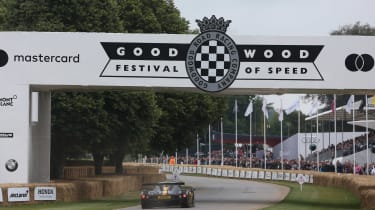 With LMP-style carbonfibre bodywork and significant aero devices, Radical quotes up to 900kg of downforce - the recently-revised Elemental RP1, a hugely capable car in its own right, makes 500kg at 150mph - with a 180mph top speed.

Probably overkill for your local trackday, and certainly for Lord March's narrow driveway, but those figures make the 20th Anniversary one of the more spectacular cars of the Festival short of the proper race and rally vehicles.