Everything you need to know about the Porsche 911 GT2 RS 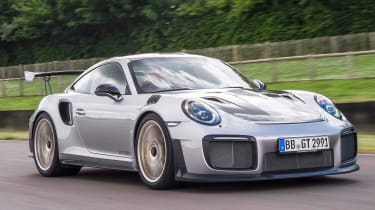 ‘It’s for adults. It’s not a Max Verstappen car, it’s a Mark Webber car.’ This is how Frank Walliser, Vice President of Porsche Motorsport and GT cars, describes the new Porsche 911 GT2 RS. The most powerful 911 road car to date, the GT2 RS has been Mr Porsche GT himself, Andreas Preuninger’s project but it’s Walliser who’s in overall charge.

The most extreme 991 generation 911 was revealed in full at the Goodwood Festival of Speed where Walliser gave us a tour around the new car. Faithfully following the same template as previous GT2s, the latest version has the same wild combination of the most powerful iteration of Porsche’s flat-six engine and a track-focused, rear-drive chassis.

The new #Porsche #911 #GT2RS heads up Lord March's driveway in unmistakeable style at the 2017 #GoodwoodFestivalofSpeed...

The numbers are pretty astonishing, with the GT2 RS producing a maximum power output of 691bhp and 553lb ft of torque, from a 911 Turbo S derived 3.8-litre twin-turbo flat-six engine; some 120bhp more than a Turbo S.

The extra power is produced from bigger, higher output turbochargers, a reshaped carbonfibre air inlet, an improved filter and free-flowing exhaust. Further power gains have been garnered thanks to a water spray system that dowses the intercooler with water to help reduce the temperature of the charge air.

Its massive power and torque are transferred to the rear wheels via a seven-speed PDK dual-clutch gearbox. The resulting performance figures are just as insane, with the GT2 RS hitting 62mph in just 2.8 seconds.

Despite Porsche GT having recently developed a new manual gearbox, for Walliser, RS means PDK. ‘The more evocative, purists’ cars will be available with a stick, but we never thought of a manual [for the GT2 RS], it was only ever going to be PDK. There’s no need for a manual gearbox in this car.’ 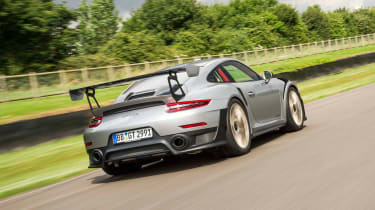 The possibility of the GT2 RS becoming four-wheel drive, like the 911 Turbo, wasn’t as quickly dismissed as the manual gearbox: ‘In the beginning we discussed it, but not for very long. The 911 concept [its rear-engined layout] means there’s not really a grip problem. In dry conditions...’

Porsche has thrown its whole box of tricks at the two-wheel drive chassis. It has rear-wheel steering, and a GT2 RS specific Porsche stability management system helping contain the prodigious power. All of this is sent through massive 325 section, 21-inch rear tyres. Like the GT3 RS, the GT2 utilises the wider Turbo body, but adds a far more aggressive aero package to the mix, with a huge rear wing and a more aggressive splitter.

The GT2 RS isn’t just a turbocharged GT3 RS, either. Walliser explains that the new car’s chassis set-up takes inspiration from the 911 race cars: ‘Compared to the GT3 RS, the anti-roll bars are softer, but we’ve increased the spring rates.’

The styling modifications have also been extensive. Behind the large front intakes are radiators and oil coolers to keep the engine and drivetrain cool. The vents on the rear haunches, finished in carbonfibre, are more pronounced than the ones on a 911 Turbo and help direct more air to the intercoolers. The bonnet mounted NACA ducts send cool air to the front brakes. 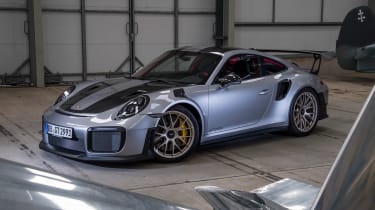 Front overarch vents mimic the GT3 RS’s, but have more aggressive raised fins and are made from carbonfibre. At the rear, massive new round exhaust outlets are connected to a titanium exhaust system that reduces weight over the rear axle by 7kg.

The interior is, possibly, just as bold as the outside, with red Alcantara on the steering wheel and roof lining. Porsche racing bucket seats are also part upholstered in the bright fabric, while carbonfibre trim pieces and the GT trademark fabric door pulls also make an appearance. It may be based on a relatively humble sports car, but Porsche knows how to bring drama to its cabins and the GT2 RS does not disappoint.

With the aim of further reducing weight, the GT2 RS has a carbonfibre bonnet and front wings, mirrors, and rear vent housings, while Porsche’s PCCB carbon ceramic brakes are also standard. Just like the 991 GT3 RS, the turbocharged supercar has a roof made from magnesium. All this weight saving means its kerb weight is rated at 1470kg, putting it only 40kg up on the GT3 RS despite its extra hardware.

If that figure is still too high, Porsche offers an optional Weissach package, which like the 918 Spyder, removes an extra 30kg of weight from the standard GT2 RS. To help save weight the steel front and rear anti-roll bars are made entirely from carbonfibre, including the coupling rods. Despite the new material they still have the same, slightly softer, torsional rigidity of the standard steel ARBs. You also get the same magnesium wheels previously found on the 918.

The standard magnesium roof is replaced by a carbonfibre one, too. Walliser wanted it to be made from carbonfibre to match the overall finish and look of the GT2 RS, but pushed his engineers to make sure that it was lighter than the GT3 RS’s magnesium roof, because as he says: ‘If you do something in carbonfibre, it has to be lighter’. 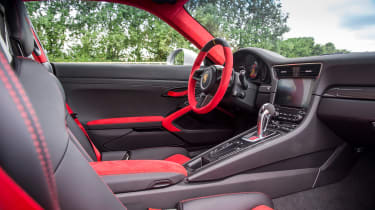 Inside, the spokes and gearshift paddles of the steering wheel are made from carbonfibre and the steel roll cage has been replaced by a lightweight titanium one. Walliser points out that the new material for the roll cage means it’s no longer FIA approved despite it being just as strong; you can sense the frustration in his voice.

>Click here to read about our passenger ride in a prototype 991.2 GT2 RS