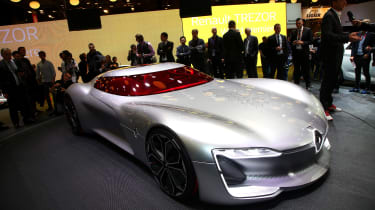 Renault has unveiled a striking sports car concept at the Paris motor show as a tool to highlight the brand’s future design direction and technological advancements.

Called the Trezor, it’s the latest product of a design philosophy that first kicked off with the DeZir concept in 2010, and has since spread to every production model in the Renault range.

Trezor is the work of Renault’s design studio led by Laurens van den Acker - who joined Renault from Mazda, where he worked on the firm’s ‘Nagare’ design language - and it takes the form of a GT-style vehicle, with two seats, sleek bodywork and a powerful drivetrain.

A 0-62mph time of under four seconds is the expected result, while Renault claims a kerb weight of 1600kg (facilitated by a carbonfibre central cell and tubular spaceframes at the front and rear) and optimal weight distribution thanks to the low-mounted battery packs. It’s long, low and wide too - lower than a Ford GT40 in fact, at 1080mm - with track widths of 2048mm at the front and 2106mm at the rear.

Other modern concept car tropes are present and correct: there’s autonomous technology, selected via the neutral, sport and autonomous driving modes, denoted by the steering wheel growing in width, and the exterior lighting signature changing to let others know the car is being driven autonomously. The tech is a prelude to Renault’s aim for fully hands-off/eyes-off autonomous technology beyond 2020.

The cabin is accessed by one of the Trezor’s more prominent features, a large one-piece door that lifts upwards and forwards. The interior is trimmed in red leather and red wood, the latter used on a dashboard panel developed in conjunction with KEIM-cycles, a bicycle frame firm specialising in wooden frames.

Stay tuned on evo.co.uk for more details on the Trezor concept, as well as live photos from the Paris motor show.