French works team the third to show off its 2017 F1 challenger. Say hello to the Renault Sport R.S. 17 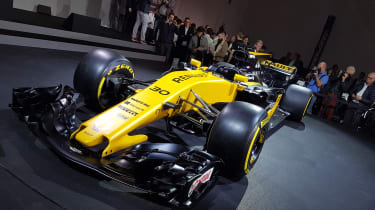 Renault Sport today took the covers off its 2017 Formula 1 challenger. Christened R.S. 17, the machine – entirely new – is expected to race for podiums this season and represents a significant milestone in the company’s ambition to add to its two constructors’ world championship titles by 2020.

For Renault’s second season back as a works team, its car is wider, longer and frankly much more intimidating than the disappointing R.S. 16 it replaces. An enormously complex and swept-back front wing, a much larger contact patch with the ground thanks to 25-per-cent wider tyres, and a lower, angled rear wing are the most noticeable features alongside the decision to again feature black prominently in the livery. Like the Sauber C36 revealed yesterday, the car also features a lengthy ‘shark fin’, which is designed to stabilise the rear axle during direction changes. 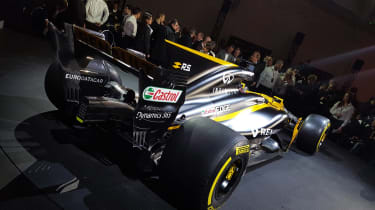 Under the new bodywork, the re-engineered 90-degree ‘RE17’ hybrid V6 spins at up to 15,000rpm and generates more than 900bhp, although 950bhp should be on the cards towards the end of the season, says Rémi Taffin, the team’s engine director. The turbocharged unit continues to use pre-chamber ignition, whereby a small amount of fuel is ignited before the main engine chamber in order to achieve more uniform combustion, but Renault is yet to adopt the split turbo setup pioneered by rival Mercedes.

Power is sent through an eight-speed semi-automatic titanium gearbox and the brakes – larger than last season’s – are from Brembo. With an overall weight of 722kg, including driver, cameras and ballast, the RS17’s power-to-weight ratio will be fearsome, at over 1300bhp per ton. 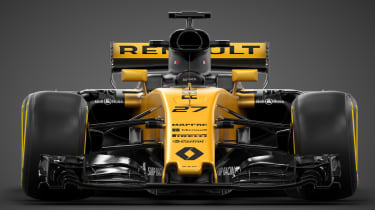 The aerodynamic changes really add up, too, and so the RS17, which will be driven by Nico Hülkenberg (replacing Kevin Magnussen) and Jolyon Palmer, generates 30 per cent more aerodynamic downforce than its predecessor. This, combined with the larger tyres, should translate to a five per cent increase in lap-time performance and a time-saving of as much as six seconds at certain circuits, says Renault Sport F1’s chief technical officer and former McLaren man, Bob Bell.

After last year’s difficulties, during which the team stopped developing the R.S. 16 early and scored a mere eight points, this is the first car that Renault’s F1 headquarters in Enstone, Oxfordshire, and engine-development centre in Viry-Châtillon, in the suburbs of Paris, have developed collaboratively from the ground up. It means the engine has been packaged with an attention to detail never before possible for the team and the car should hit the ground running.

‘Fifteen years ago we were building an engine in France, a chassis in Enstone, and we would meet [for winter testing] in Barcelona and it would take us a week to bolt everything together, then we would run for two laps!’ says Taffin. ‘Next week, on the other hand, we’ll be ready from day one because we’ve prepared the car all together.’ 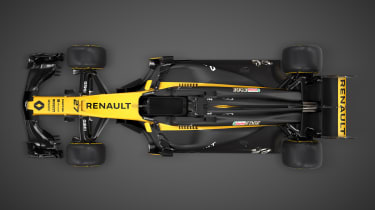 R.S. 17: first impressions from the drivers

The driver’s are yet to experience the car from behind the wheel, but asked how it felt during simulator work, Palmer told evo: ‘Extremely quick, and different to anything else I’ve ever driven. The difference in aero performance is massive – in fact many legendary corners are now going to be taken flat-out.’

In preparation for more extreme cornering forces, both drivers have been focusing on upper-body strength over the winter. Palmer, lean but by no means a small man, reckons he’s achieved a four-kilo gain in muscle mass since the end of last season by spending every day in the gym, and now tips the scales at 76kg. He also thinks that any drivers who haven’t been so dedicated will drop off during races – and very obviously so for TV audiences.

However, even with heavier steering and massive downforce, these cars are not the same monsters as those of the last V6 turbo era, which even the magnificent Gilles Villeneuve hated. ‘The cars now are so refined and the hybrid engines have a very smooth application,’ says Palmer. ‘The torque is huge, though – even drivers from the V10 era think of these cars as beasts.’ 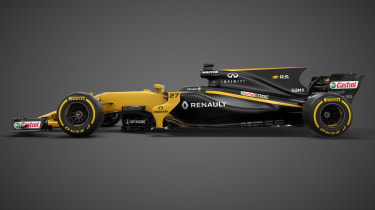 Renault admits that nobody will really know whether these cars are going to improve the spectacle of Formula 1 until the lights go out for the first race of the season, in Melbourne. Some say that increased mechanical grip will mean drivers are able to find more novel lines around each other through corners. Others argue that such an increase in downforce is going to neuter the cut-and-thrust of wheel-to-wheel racing.

Palmer, however, reckons than more drag will create a greater slipstream, allowing for more natural overtaking on the straights and, with the addition of DRS, far higher closing speeds. Combine this with the later, more violent braking permitted by the larger rubber contact patch with the tarmac and stronger brakes and you’ve got a recipe for fireworks in the braking zones.

As for the rivalry between the two Renault drivers, Jérôme Stoll, president of Renault Sport Racing, told us: ‘Frankly, I don’t know. On paper Nico should be better, but that paper is nothing but a document for the people at headquarters. Now we have real life. Jolyon won’t let Nico be alone on the grid.’