In today’s classics market this rare Renault 5 Turbo 2 homologation special could be considered a steal. 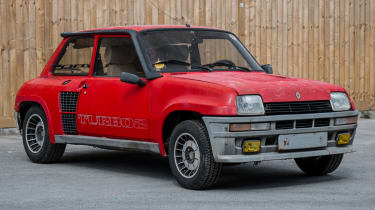 A 1985 Renault 5 Turbo 2 ‘Type 8221’ is going under the hammer at Silverstone Auction’s May Sale later this month. One of only 200 built, this left-hand-drive example bares a fair estimate of £25k to £30k, perhaps a reflection of its haggard state, however it presents in original condition.

Since new, two names have been printed atop the Renault 5 Turbo 2 Type 8221’s V5 form, the first for 32 years. Like its Group B counterparts, this example looks battle-scarred, and furthermore, it’s been well-used, showing 90,000 miles on the odometer.

It’s certainly in need of some TLC. Committing to a comprehensive restoration could well be worth it, with experts suggesting a concours-grade example could fetch anywhere north of £100k.

Some 200 Turbo 2 Evolution Type 8221s were commissioned to satisfy Group B rallying homologation regulations. In order to develop a Group B car, beyond its initial design, entrants had to manufacture 200 road-going counterparts of the evolved car, running the upgrades they’d hoped to equip their updated rally competitor with.

So the 8221 is an evolution of the Renault Maxi 5 Turbo, of which 400 were built; again to comply with homologation requirements. The transformation to realise the 8221 brought an aluminium roof and alloy doors, as well as a suite of engine upgrades: a stronger crankshaft, uprated cylinder heads (and gaskets) and a tougher turbo are just a few to mention. Official power figures were never revealed, however many believe the mid-mounted, 1.4-litre four-pot deployed more than 170bhp though the rear wheels.

Having emerged from a long period of storage, it doesn't look like care and attention has come to the Turbo 2 easily. That said, its previous owners have at least held on to original documentation including the bill of sale, handbook and service history. It will also cross the auction block complete with the original jack, parcel shelf and wheels.

The Silverstone Auction May Sale will take place at the Silverstone race circuit on 19 May 2018. Also featured on the lot list is the Very first Ford Sierra Cosworth RS500, which has been tagged with a six-figure estimate.