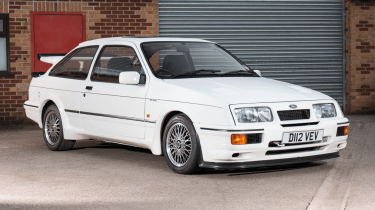 It isn’t often you’ll get a chance to own chassis number one of anything, but someone will get that opportunity at the upcoming Silverstone Auctions May sale when the first Ford  Sierra Cosworth RS500 crosses the block.

Not just the first RS500 ever produced, it’s also the first of four pre-production cars and the only one built by Ford itself rather than Tickford, which produced the other 499 cars ever offered for sale - the 500-car total ensuring the RS500 complied with Group A homologation regulations.

RS500s were a surprisingly large step on from their conventional Cosworth counterparts, primarily thanks to an upgraded engine honed for competition (and put to good use in various touring car series, most notably the British Touring Car Championship.

The cylinder block was thicker for improved strength, the turbo upgraded to a Garrett T04, a larger intercooler and better oil cooling system and revised induction and injection setups, for a maximum output of 222bhp. Visually it also gained a lower spoiler below the whale tail and a redesigned front bumper - and all were right-hand drive.

This car’s early status means the car was originally used as a prototype vehicle by Ford, finalising all of the car’s unique components before the model was signed off for full production. This history means it was re-shelled by Ford back in the day, but the short run of RS500s means that even this prototype was sold to an actual buyer back in March 1987. 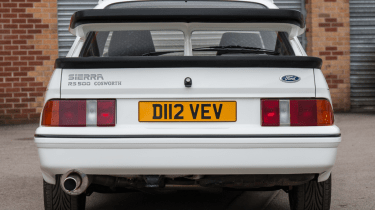 Most recently the car spent ten years in Norway, returning to the UK in February when it was sold to its current owner. During that time it’s amassed a large history file full of old MOTs, a handful of early tax discs and a report confirming the car’s provenance by marque specialist Paul Linfoot. The only listed changes from the original car are a new top section to the dashboard and a Magnex exhaust, but otherwise it’s all present and correct. 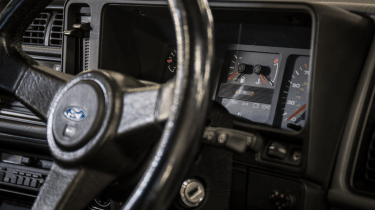 Mileage may affect the value however - a pleasing figure of around 42,000 miles means chassis one has actually been used over the years rather than simply stored away. Hopefully, the buyer of this rather special RS500 will continue that trend.

You can find more details on the RS500 and other cars from the sale at Silverstone Auctions.