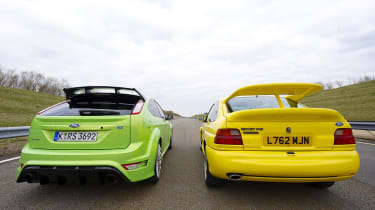 So, let’s get this straight. Escort Cossie: iconic, indomitable, Britain’s Integrale assassin, nemesis of the hot hatchback and, by any reasonable definition of the term, the Real Deal. And primrose yellow. For reasons known only to the art department, of the three Cossies that reside at the Ford Heritage Collection, we’re borrowing the one with the slightly effete non-standard paintjob. It’s the one with the shiny-rimmed ‘Personal’ steering wheel, too. More worryingly still, it’s been fitted with a pair of front Recaros toting metallic purple shells and velour facings straight out of a 1975 Odeon. Oh, and the driver’s one wobbles on its runners.

Hardly the expected introduction to a car with such a significant provenance. Because this is the very Escort Cosworth that Ford used in final development before signing the programme off. In a sense, it’s the most original of them all. Only 25K on the clock, then, and a real piece of history in my hands as I cruise up the M1 to Millbrook to present the be-winged one with a final task before it returns to its quiet life beneath a dust sheet. Simply this. To show the new Focus RS – the car some are calling the greatest front-drive hot hatch ever – the precise way to the cleaners (via the Bedford Autodrome the next day).

I’m keeping the Cossie’s powder dry. Despite its youthful mileage, it’s 17 years old after all. Its reputation can act as a forcefield. Drivers of far lesser Focuses than the one we’re off to dust seem keen to show the old-timer what they can do but there’s no point responding: apart from embarrassing the ‘new hotness’ RS, there’s nothing left to prove.

But some stuff is beginning to make me a little nervous. For a start, I just don’t feel comfortable. I’m not sure how much the purple Recaros are to blame, but I wouldn’t recommend the driving position to anyone with vertigo. I seem to be looking down on the dash – and the steering wheel is on the slant, too. The gearchange, far from being as sharp as a Barack Obama suit, is as woolly and long-winded as one of the President’s unscripted press conference rambles. And as I press down on the brake pedal it makes a gentle hissing noise but initiates little in the way of retardation. As for throttle response, it must be there somewhere.

Perhaps I need to adjust. Or perhaps I should have done my homework before I set off. Yes, I drove the Cossie when it was new and was comprehensively blown away. Jeremy Clarkson liked it so much he bought one. But memory can play cruel tricks and, well, mythology has a habit of obscuring some inconvenient truths. All right, when the Escort Cossie’s longitudinally-mounted YB series 16-valve four first appeared in the 1986 Sierra it was probably the most advanced production car engine in the world. But by 1992 it was no longer so special. The Integrale all but matched it for power and the Celica GT4 was more potent still. By the end of the year, the Subaru Impreza WRX and Mitusibish Lancer Evolution made off with more of the Cossie’s thunder and, to put it bluntly, 0-60mph in around 6.2sec and a top speed of 137mph (partly a function of the lousy 0.38 Cd), didn’t cut it anymore.

Then there was the turbo. For homologation reasons, Ford opted for a big one, the Garrett T35, as used on the RS200. Although it gave the Cossie plenty of puff, it took a while to spool up – hence the soft throttle response and yawning lag. In 1994, Ford went a long way to fixing the problem by fitting the smaller and more agile T25 turbo and replacing the original Weber-Marelli engine management with the new Ford EEC-IV ECU. Peak power dropped by 3bhp but drivability  improved by an order of magnitude. Not Cossie number one, though. Big turbo, big lag.

Just how much, I’m about to discover on the back-road to Millbrook, which throws in a useful selection of curves, humps, dips, campers and one deleciously long straight with a tight right-left combination at its end. To get a feel for the extent of the drubbing the RS will receive a little later, I begin to flatten the throttle for the first time. What initially ensues is as predicted: nothing… two, three… then whoosh. But it’s not a big whoosh. Not a single syllable expletive whoosh. The Cossie feels quick-ish, pulling well between 2500 and 5000rpm. But there isn’t much happening above or below and the engine note, apart from the faintest hint of twin-cam tang, sounds disappointingly dull. No, not quite the hit I was hoping for.

At least I won’t have to slow down much for the bends. And, to a degree, this is true – the brakes aren’t all they might be. Neither is the turn-in, which feels disconcertingly soft and vague. To begin with there’s understeer, lots of understeer. I can feel myself flushing, feeling a tad embarrassed that my recollections of the Cossie’s performance and ground-covering chops seem so pitifully rose-tinted. But a few acclimatisation bends further on, things begin to click. Anticipating the lag and trail-braking into bends gets the Cossie pointing more purposefully and flowing at a respectable lick. No torque steer, lovely balance and, although a bit crashy to listen to, a supple, well-controlled ride. As we pull up to Millbrook’s gatehouse, the Cossie is cool once more.

Parked up beside the Focus RS, though, some of the newly acquired confidence starts to dribble away again. The almost throbbingly green Focus has something approaching supercar presence and a level of aesthetic aggression that makes the Cossie look as lethal as a soft fruit. Inside, too, its matching green Recaros lock you into a maximum-attack mindset as surely as they clamp your torso in place when the g-force ramps up.

While Green and Wallace drive off in the Cossie for some high-speed Millbrook photography, I head back to the same section of road in the Focus. It seems a lot shorter, somewhat bumpier and vastly more exciting. Where the Cossie, with a little attitude adjustment and gentle coercion, managed to meld with the rhythm of the road, the Focus simply annihilates it. It does so with no great finesse. There is torque steer, though less than you’d expect with 325lb ft, and scant feel. It isn’t that the steering is too light – it feels weighty and precise – just devoid of useful detail about the road’s surface, save for the camber changes that tend to excite the torque effects. You can live with it so long as you don’t expect the helm purity of a Megane R26.R

The compensation is a motherload of the stuff that gets things done: grunt, grip and traction. The amount of adhesion and drive the Focus musters out of bends is, at first, hard to get your head around. Likewise the speed it heads off down the next straight. According to the VBOX, it’s exactly as quick as Ford claims, hitting 60mph in 5.9sec and 100mph in a fraction over 14sec. Unsurprisingly, the Cossie can do nothing about this (6.2sec to 60 and 17.4 to 100), but subjectively the gap is much bigger. Those standing start figures are deceptive. It’s the way the Focus packages its power on the move that gives it such remarkable real-world pace, making so much of its prodigious torque available for so much of the time that the sheer dimension of its in-gear acceleration from less than 2000rpm – especially in 4th, 5th and 6th – is often surreal.  And it doesn’t let up. The RS is still pulling eye-wateringly hard at 6500rpm and has a special rev-limiter that allows three-second bursts of up to 7050rpm.

Next day, on the way to Bedford, it proves it can comfortably hold the Aston Vantage 600 in a straight line. Which means a swift adieu to the 600bhp GT on anything remotely twisty. All the time, it feels supremely well tied-down, with vanishingly small amounts of pitch and roll, and sounds like an ST that’s been gargling with razor blades. The engine’s throttle map is so aggressive, the first inch of throttle travel stokes up crushing levels of urge. The rest is largely gratuitous unless something expensive needs cutting down to size.

The brutal truth is that the Cossie doesn’t warrant the extra ankle action. It doesn’t just feel slow after the Focus, it feels as if it’s driving through treacle. The legend lives on but, for one rose-tinted memory, the reality check has arrived.