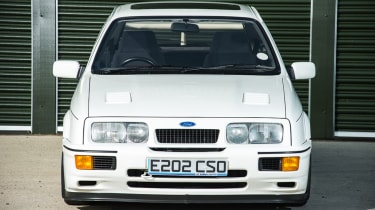 Silverstone Auctions sold a low-mileage, 1988 Ford Sierra Cosworth RS500 at the NEC Classic motor show. With a tad over 6000 miles covered in almost three decades, the car had a conservative estimate of £100-£115K and the hammer finally dropped right on the money at £113k.

The mint example is one of 500 produced by Ford to homologate the hot Sierra for touring car championship action. The white finish adds to the exclusivity of the car – 80 per cent were specified in black, the remainder a mixture of Moonstone blue and white. There was plenty of scope to lift performance beyond the standard 224bhp – the internals were good for a race-trim 550bhp – after all the RS500 was a product of its motorsport counterpart, like the new Ford GT.

Only a few months ago a RS500 in similarly immaculate condition fetched £115k at auction with almost double the mileage, so despite what seems to be a hefty sum, it's something of a surprise that this example didn't go for even more. The RS500 holds legendary status among Ford fans and is one of the most iconic cars in the marque's lineage.

The RS500 was a byproduct of Ford’s appetite for racing glory. It swiftly became a blue-collar hero with outrageous looks – see the whale tail – boasting Porsche 911 and BMW M3 rivalling performance. A bigger turbo, reinforced engine block and revamped induction system were a few of the modifications made to the RS500 to elevate performance above the standard car. The extended lip of the oversized spoiler, RS500 badging and reprofiled front apron inform you of the mechanical changes beneath the skin.

No fewer than 15 other Fords went under the hammer at the sale including: a Capri 280 Brooklands, Mk2 Focus RS and a rally-spec Escort MKII RS1800 which sold for £47k, £44k and £98k respectively.