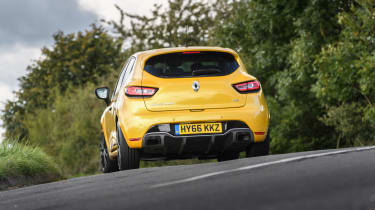 The revisions to the Trophy’s chassis over the standard Clio 200 seem huge on paper. It has a 10% quicker steering rack, it’s 20mm lower at the front and 10mm at the rear. While the Trophy’s dampers are firmer and the rear springs have been replaced with ones that are 40% stiffer.

The changes don’t feel as dramatic as they sound, though. You’d imagine 40% stiffer springs would be unbearable on British roads. The Trophy certainly feels stiff initially, but over 50mph a real quality to the ride starts to shine through. It doesn’t glide over bumps, but it also doesn’t crash into them. It’s just firm enough to help communicate what the chassis is dealing with without being uncomfortable. There’s also a huge amount of body control; not once does the body fall out of sync with the road.

As you’d expect with such a stiff chassis there’s also very little roll. Combined with the quicker rack, this makes turn-in feel very direct. There are also vast reserves of grip at the front axle so you can carry a lot of speed into a corner.

The Trophy isn’t fitted with a proper mechanical limited slip differential. Instead the front brakes interfere with the front wheels to increase traction. For the most part on the road, you aren't missing out. Occasionally in slow corners, where you need the very low 2nd gear, the inside front wheel will spin up. It’s rather unexpected as there’s so much grip most of the time. An LSD would help this, but as it happens so infrequently it doesn’t feel like a necessity. 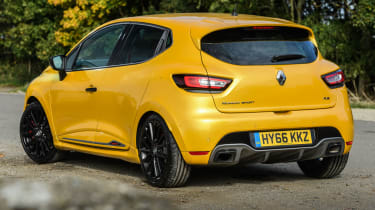 On track the lack of limited slip differential is more noticeable. At turn-in, the effect of sudo-LSD is very helpful and the Trophy really darts into a corner. Once on the power though it can’t stop the inside front wheel from spinning.

The Trophy isn’t as lively as the previous generation, naturally aspirated Clio 200 Cup. It’s not as expressive and doesn’t want to rotate quite so easily. The old Clio felt lower and it felt very square on the road. The Trophy’s wheelbase feels longer, like it simply doesn’t have the physical layout to ever be as fun as the old car. But the Trophy still possesses some of the qualities that have made Renault Sport cars so loveable. The chassis displays all the traits you’d expect from a well-sorted front-wheel drive hot hatch and trail-braking or a lift of the throttle helps bring the rear into play. The Trophy’s rear might not be as mobile as the old car, or need the same deliberate corrective inputs, but the Trophy’s chassis is effective, intuitive and, if you get the opportunity to witness its talents, it is satisfying to drive.

The quicker steering that has been fitted to the Trophy has not helped generate any more feedback. The rack is fairly lifeless and never communicates any meaningful information from the front tyres. The lack of feel isn’t a huge problem when trying to gauge grip levels because the chassis is so transparent. However, the lack of feedback just adds another layer you need to penetrate before you can start to enjoy the Trophy.

The chassis is undoubtedly talented, but the uninspiring engine, lifeless steering and less than engaging gearbox mean it’s difficult to tap into what’s great about the Trophy. The small glimmers of genius that it does show are often only fleeting and don’t last long enough to be really enjoyed.