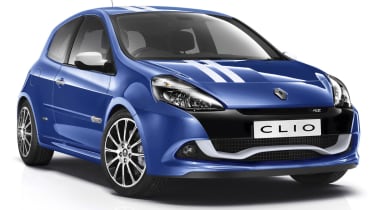 Renault’s hot hatchback range is growing. The 2010 Geneva motor show has seen the reveal of a number of new additions that sit in a variety of market segments. Of biggest interest to us is the Renaultsport Clio 200 Gordini. Much like the Gordini Twingo 133, it’s a plusher and more luxurious interpretation of a hardcore Renaultsport hatch. Performance and dynamics remain the same: the Clio’s 197bhp 2-litre naturally aspirated engine is untouched, as is the rather excellent chassis. The choice of Sport or Cup setups remains. Our long termer boasts the latter, and you can read about that here. What our Fast Fleet 200 Cup doesn’t boast is the plethora of extras this Gordini version gets. As well as an exterior brush up (blue paint and white stripes the Gordini trademarks) you get a more cosseting interior. There’s leather aplenty alongside more liberal use of the blue and white paint, at the expense of the regular 200’s excellent Ferrari-inspired yellow rev counter, sadly. The Gordini Clio 200 will be on sale in the UK this summer, priced from around £19K. Alongside Gordini was the first public appearance of ‘GT by Renaultsport’, a less focused but more attainable and mainstream version of the Renault hot hatch. It’s a philosophy particularly suited to the new Megane, with GT versions of the coupe, hatch, Sport Tourer estate and CC convertible available. You get the choice of a 178bhp petrol or 158bhp diesel engine in all, which is mated to the sports chassis setting from the Renault Megane Coupe. Other big news from Renault is the introduction of a dual-clutch auto transmission to its range and the announcement that its comprehensive range of electric vehicles will begin European sales from 2011. Whether we see a Renaultsport interpretation of one of those remains to be seen… Read more about evo’s long term Renault Clio 200 Cup here See a standard Clio 200 Cup go round Bedford’s west circuit Gen-up on the Renaultsport Twingo 133 Gordini hot hatch here