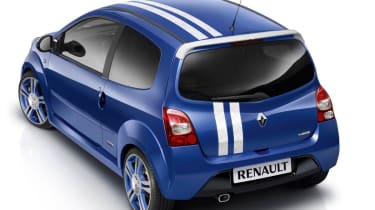 Renault is relaunching its Gordini brand. It thrashes out the French firm’s hot hatchback range and further strengthens Renault’s commitment to the fast three-door, as rival Peugeot pulls the plug on its GTIs. And this funky little Renaultsport Twingo is the first example of a modern-day Gordini. The Twingo is a great place to start, with the hot RS version making up 20 per cent of the dinky city car’s overall sales. Before you get overly excited, though, it’s identical under the skin. The same buzzy 131bhp 1.6-litre engine remains intact, as does the Renaultsport tuned chassis (with the option of Sport or Cup suspension). It’s still a thoroughly good car, mind, as our mini hot hatch battle testified recently. As you can probably see, the big changes are cosmetic. The exterior gets the classic Gordini colour scheme with a bit of a twist, the offset white stripes adorning a new Malta Blue metallic paint finish. The standard RS Twingo’s 17in alloys get a lick of paint, too, with the option of black or blue finishes for the inner rim. You’ll also find the new RS badge up front and Gordini Series badging ahead of the rear arches. Clamber inside and you’ll be greeted by more Gordini tweakery. The onus is on added luxury, with black and blue quilted leather seats (with extra lateral support), leather panels on the doors and an abundance of blue and white detailing, the highlights being the rev counter and steering wheel, which neatly turns the Gordini stripes into a centre-point indicator. All this will set you back 15 per cent more than the standard Twingo 133, with prices starting at around £14,000. The car launches in the UK in March 2010. If you fancy a bigger slice of Gordini pie, then fear not. Up next will be a Clio Gordini, which we’ll see for the first time next spring with sales likely to follow a few months later. Similar treatment for the Mégane looks further off, though, with Renault’s focus on 'GT by Renaultsport' a possible reason. Click to read more details of the new Renaultsport range.

Click to see Stephen's blog on the Gordini name relaunch