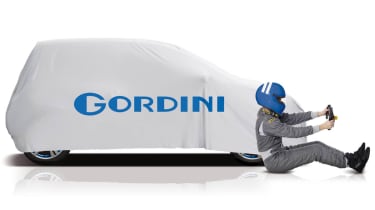 Renault’s Gordini hot hatches are back. It’s great news, and a welcome return to a sporting name from the brand’s past.

Gordinis won’t, however, compete with existing Renaultsports. They will be mechanically identical to the existing hot Renault range, with the same engines and Sport or Cup chassis options.

The emphasis will be on personalisation, with an abundance of colour, trim and wheel options available. And yes, those Gordini stripes and racing blue paint (seen on the Clio 182, pictured right) are part of the plans. The idea is to take on über-personalisable rivals from Mini and Abarth.

The first car under the new name will be the Twingo Gordini RS (based on the Renaultsport Twingo 133), presumably the car that’s tucked neatly under the cover in the main picture.

It’ll be revealed on November 25, before being launched in Spring 2010. A Clio Gordini RS (based on the belting 200 Cup) will follow a few months later.

We’ve driven the new Renaultsport Megane 250 Cup in Issue 138 of evo, our bumper Car of the Year edition, which is on sale from Weds November 11.

Read about other new Renaultsport models due