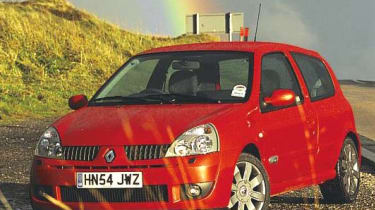 Please don't think badly of me, but I never really 'got' the whole Renaultsport Clio thing. Sure, I understood that the 2-litre 16-valver was a cracking hot hatch, but I simply wasn't convinced of its overwhelming superiority to its rivals. Guess it didn't help that my only experience of the Clio 172 was photographer Andy Morgan's heavily used, 30,000-plus miles, flat to the floor everywhere, always laden to the rooflining long-termer. But recent exposure to the Renaultsport Clio 182 in standard form, and now to the new 182 Cup, has helped put me straight on the charms and abilities of the Clio, though personally I remain sceptical that it's crushingly better than the Honda Civic Type-R or Mini Cooper S - feel free to be outraged, as several evo colleagues will be. The real news here, though, is the introduction of the 182 Cup, which at the time of the standard 182's launch Renault claimed it wasn't sure it would build. Response to the 172 Cup was so strong that there wasn't really ever any doubt that Renault would create a similar lightweight, cut-price derivative of the 182. And sure enough, here's the 20kg lighter, £900 cheaper Renaultsport Clio 182 Cup. In fact, the saving amounts to £1295, as the Cup package includes uprated suspension and different spoilers that cost an extra £395 fitted as options to a standard 182. But while the 172 Cup was a hardcore special, stripped of air-con, ABS, traction control and a few other luxuries to bring down its weight and price, the 182 Cup isn't quite so full-on. Because rather like the Elise, when it comes to daily life with a car, owners prefer the theory and cachet of a driver-focused machine to the reality of it. Hence the Clio 182's spec includes air-conditioning (albeit the manual type rather than the standard car's automatic climate control) and ABS. To be fair, the inclusion of ABS is something we welcome, as its absence on the 172 Cup was acutely noticeable, especially on the open road in the wet. And although we're probably too hairy-chested to admit it, having air-con is a real bonus, too. In fact, if you've not driven the standard 182, you might wonder what, exactly, you're having to do without. After all, you get central locking, electric windows and a radio/CD player with automatic speed-related volume control - hardly slumming it and hardly hardcore. So where has Renault made the savings? Well, the hi-fi isn't quite as high fidelity as it is in the standard 182, the upholstery is true poverty spec, and you don't get xenon headlights, headlight washers and automatic headlight adjustment; also missing are lateral airbags, heat reflecting windscreen, automatic wipers, and the split-folding rear seat is replaced by a one-piece bench denuded of headrests. It's clever stuff, because these are all things that you're never really aware of, so probably won't miss. The big question is, though, do you notice the missing 20kg? That's a tricky one to answer, because once you've been told about the weight loss, you're sure you can feel the difference - the Cup is a little bit livelier, a little bit daintier on its toes, more willing to rush in to an apex than the standard 182. Without prior knowledge, you'd need to do a fair few miles of back-to-back driving before feeling sure of giving an unequivocal answer. Whether or not the difference is immediately evident, you quickly warm to the Cup. Even our barely run-in test car had a natural vivacity, as palpable at low speeds as it was with the engine wrung to the redline. The firmer suspension means that the Cup's ride is slightly more agitated around town than the standard 182's, but you're unlikely to feel aggrieved and by the time you've built up some speed on back-roads, you simply won't notice or care. And building up speed is something the Cup is remarkably good at. Ankle-twitch throttle response is coupled to solid punch from 4000rpm and above, and before you're fully aware of the fact, you're slamming along at a pace that dare not say its name. Shame that the engine is boomy at 5000rpm and that the throttle pedal is sprung so as to deny you the last half-inch of travel unless you're really determined to have it, but again, these are gripes you can live with. As with the regular 182, the Cup rewards and encourages an attacking driving style, turning-in incisively, gripping hard (while cocking a rear wheel in the air), and allowing you a bit of tail-end tomfoolery if you lift-off mid-roundabout. It's a bit of a hooligan, but in a good way. King of the hot hatches, then? Could be, but a clash with the revised Mini Cooper S Works is needed to decide that one. For the money, the Cup is fantastic, especially as in the current world of Renault retailing, you could doubtless shave a few quid more off the price. Finally, I get it.