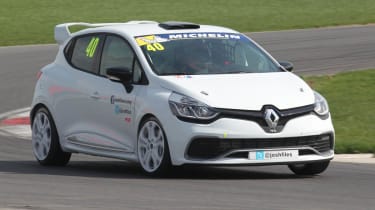 The new Renault Clio Cup racing car has debuted in the UK. While the outgoing, Clio 200 Cup-based racer continues service in the BTCC-supporting one-make series in 2013, next season will see its turbocharged replacement take over.

And the new car has got off to a positive start, lapping Snetterton’s 300 circuit layout almost seconds quicker than its forebear.

Developed from the new Renaultsport Clio 200 Turbo hot hatch, the racer uses a 217bhp 1.6-litre turbo engine (up 20bhp on its showroom-spec equivalent) mated to a six-speed sequential gearbox with paddle shifters and an AP Racing clutch. The new racing Clio also gets adjustable Sachs dampers with specific aluminium wishbones and a set of beefy AP brakes.

The latest car will race this year in the Clio Cup’s European equivalent, before appearing in the UK championship from 2014. Clio Cup front-runner Josh Files will juggle competing in both series in 2013, and was behind the wheel for the turbo car’s first laps of Snetterton. And he’s pretty pleased with it: ‘the thing that impresses you the most when you first drive the new Clio is the engine power and the gearbox, there’s so much more power than the existing car and the gearbox is really good – the changes are lightning fast with the paddle shift’.

The new Renault Clio Cup racing car costs 39,900 euros plus VAT (around £40,300) with deliveries for UK cars starting in September.