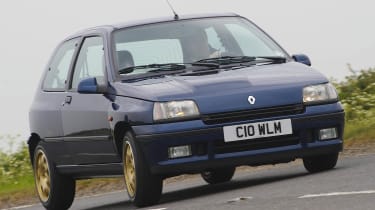 The Renault Clio Williams is set for a comeback. We reported the potential return of the iconic Clio nameplate when Renault returned to being the Williams F1 team’s engine supplier in summer 2011. These plans were quashed a year later upon the unveil of the new Clio 200 Turbo, but a chat with Renault COO Carlos Tavares at the launch of the TwinRun concept revealed plans have been reignited.

‘There are several plans for that and we are very open and eager to do specific Williams versions’, said Tavares. ‘There’s fantastic history and heritage. We have deep respect for the man [Sir Frank Williams], for his passion, and we have done great things together. There is some emotional humanistic link with Williams. I think that can happen’.

And the car most likely to receive the treatment first? ‘There was a Clio Williams in the past so of course that’s an obvious candidate’, Tavares added.

He was also keen to expand upon plans for the returning Gordini name, which makes the switch from its recent, stripes and paintjob usage to something more hardcore.

‘Beyond the Renaultsport models we will have track and rally variations labelled Gordini. There could be more horsepower, a specific chassis, specific brakes, perhaps it’s lighter. Some of them may be road legal, but it’s not a must. What is fordbidden is that we use the Gordini label on anything other than extreme versions.’

The EDC twin-clutch gearbox that’s struck of some controversy in the new Renaultsport Clio looks set to stay too, with appearances likely on future hot Twingos and Meganes.

‘I think paddleshifts are something that are going to stay; they are very convenient, sporty, you can keep your hands on the steering wheel and because the gearchange is so quick it does not destabilise the car as much when you’re going quickly.’