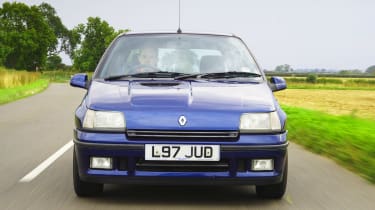 I can’t stop looking at it. Sad, maybe. But you can mock all you want – I’m proud of my newly acquired Williams and any opportunity for another quick glance is happily taken.

When I say ‘my’, I mean ‘our’, as it’s a joint purchase between me and senior designer Adam Shorrock. We both developed a hankering for the original hot Clio after driving Renault’s pristine example back in June, and after scraping together a grand each, the search began. Splitting the costs when the car succumbs to its French roots is attractive; the potential punch-up over who gets to drive it less so.

Still, I think we’ve done rather well. We’ve bought a Williams 1 (naturally). It’s number 0421 and has garnered just over 81,000 miles since its March 1994 registration. After some typically British haggling (i.e. polite but rubbish), we paid £3000 for the car, fully taxed and MOT’d. That may strike you as a lot, and it’s a little north of our initial budget, but after three months of hunting, and numerous test drives and poke-arounds of slightly cheaper but rusty cars, L97 JUD looked like a particularly wise buy: there’s simply no rust to be seen.

We’d been close to calling off the search after seeing just how rotten similar-aged cars could be. In fact, we flirted with the idea of buying the Williams’s dad – a Renault 5 GT Turbo – after test driving a particularly mint 1987-vintage car, pictured right.

I’m very glad we didn’t, though. Patience has paid off, and now we’re finding ourselves coming up with any excuse to drive our Willy. As I write, we’ve had the car four days, so its mileage this month averages out at 145 per day. Each one of those has been utterly sweet, too: it rides far better than its modern-day equivalent, the Clio 200 Cup, and its 150bhp 2-litre engine feels lustier, its smaller torque figure (126lb ft v 159lb ft) delivered lower down and with more vigour, helped by the car’s lighter weight.

It’s a very pleasant place to spend time, too. The dashboard is unmarked, all the electrics and dials are in full working order (bar a mildly deceptive fuel gauge) and those iconic Williams seats look as wild and feel as plush as I imagine they did new. The exterior isn’t as great. There are numerous chips and scratches across the paintwork and the alloys need refurbishing, but with everything perfect we’d have had to stump up twice the money.

‘We’ve bought a blinder!’ grinned Shorrock as he clambered out after the ceremonial first drive. I’d followed behind in the Fast Fleet Suzuki Swift, and was already feeling pangs of pride just looking at our new car tearing up the road. Now a bit of exterior smartening beckons to make that pride even stronger.Big, big thanks to Mat Brown, Richard Northrop and Jeremy Townsend for their help in finding a top-notch car. Renault Clio Williams owners' club here