The shapes may be familiar, but they conceal the ultimate incarnations of the latest Mini Cooper and Renault Clio 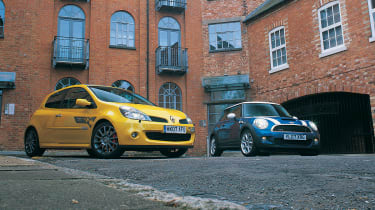 There’s a programme on BBC2 at the moment that everyone seems to be banging on about. It’s called Heroes. I watched it the other night. It’s no Vicar of Dibley but it’s alright. In this drama, ‘ordinary’ Hollywood people go about their daily lives mingling with the unwashed populous. But all the time they’re blending in, they are also secretly blessed with extraordinary superpowers. From what I can gather, they’re like a small troupe of Clark Kents and Peter Parkers who never bother with the spandex.

Now, it occurred to me (and I’ll offer this one up to the scriptwriters for free) that if they wanted to add a parallel touch of verisimilitude to the cars that these ‘Heroes’ drive, then they should buy up a few Clio 197 R27 F1s and Mini Cooper S Works. These are the absolute pinnacles of the current Clio and Mini ranges. The F1 Team R27 takes the 197 and adds even more definition to its finely chiselled handling. The Works takes the Cooper S and augments its power and torque to bursting point. Both are ordinary little hatches capable of blending into the humdrum, the banalities, the traffic snarl-ups of everyday life, yet they are also possessed of extraordinary capabilities.

OK, I admit they can’t heal their own wounds, predict the future or wear worryingly attractive cheerleader outfits, but they can fly down a road so surprisingly fast that almost nothing will out-run them. So they’ll bimble along for weeks on end, doing the shopping, the school runs, crawling through town centres, making do with the odd jink through a roundabout. But when the time’s right, they’ll stretch their legs, gulp down some clean country air and hang off the exhaust pipes of anything exotic that wants to play.

Fourth gear in the Clio, greenery blurring past the windows, engine sounding competition-car hard-edged as the revs finally hit their sweet spot. There’s a tight left ahead and you’ve just passed the point where common sense says your foot should be on a different pedal. Hit the brakes hard, wringing the final millimetres out of the travel, feeling the car stand on its nose, teeter on the edge of lock-up. Twist your heel right and blip once, twice as your left hand rushes forward through a change to third, then back and across for second. The Clio turns, as you know it will, front Contis sliding a fraction but the chassis as a whole gripping on a supernatural level. Then it’s back on the throttle all the way to the bulkhead, urging the revs to climb back up as you watch the Mini ahead reopen the gap you’ve just closed.

In the Mini you’re cursing the momentary wheelspin as you tried to load the front tyres before you’d wound off all the lock from the left-hander. Reposition yourself in the middle of the seat. Snick up another gear, enjoying the beautifully weighted movement of the silver-topped ball but moving your hand quickly back to the wheel, ready to hang on over the bumps and cambers that are tugging at the Mini’s nose. Then it’s into a quickish right – flick the nose in and feel the car swivel as though there’s a stake just between the gearstick and the handbrake. More movement between the tyres and the road surface, both vertically and laterally; not quite the composure of the Clio. But as the right-hander merges back into a left, the Mini’s switch in direction with a small dab on the brakes for confidence is a glorious small-car jink that almost snaps your neck with its directness.

And on they go, tearing across the countryside, free from the humdrum for an hour or so.

Parked up back in their urban habitat, pinking as the metal cools, it’s the Clio that shouts the loudest of these two, although largely due to its extreme yellowness. You have to love the touches like the vents on the back of the front arches and the exhaust pipes that sit flush within the diffuser. Pick a more sedate colour, however (saving yourself a scarcely believable £1200 in the process), and like the Mini it would be hard to tell that it had extra sparkle under the skin.

Apart from the small badges, the only telltale on the Cooper is the pair of sharp, stubby exhaust pipes with ‘Works’ etched into the brightwork. It’s nicely subtle and, if the rest of the look isn’t as motorsport-suggestive as the Clio, it nonetheless retains that unsurpassed, funky, classless appeal that makes you feel you could turn up anywhere in it.

Open the door to a Mini and you’re never quite sure what you’re going to find. This one has pinstripe cloth flanked by pads of brightish blue leather on the seats, topped off with chequerboard-effect trim on the dash. Combined with the mood lighting, it’s all a bit Laurence Llewelyn-Bowen. It’s the Clio that better understands our sort of automotive décor. Not that it tries very hard – it just has a pair of the best Recaro seats you’ll find in any car.

Under its stickyback plastic, the R27 has been lowered by 7mm compared with the stock 197, while the springs have been stiffened by 27 per cent and 30 per cent front and rear respectively. The MacPherson struts also have a 10 per cent increase in bending stiffness combined with more flexible bump- stops to increase stability under braking (the awesome Brembos remain the same 312mm and 300mm respectively) and improve the steering precision. These changes all add up to the Cup chassis, soon to be a stand-alone option on all 197s. The 2-litre normally aspirated engine is untouched: 197bhp at 7250rpm and 159lb ft at 5550.

The Works treatment closes the gap. Under the Mini’s fake-scooped bonnet, power is up by 17bhp to 189bhp at 6000rpm and torque has increased by 7lb ft to 199lb ft at 1750rpm. If you add it as an option when you buy the car new, the cost for this tweakery is £1095 plus four hours’ labour (about £450). It’s not a lot, but then it’s not a lot of an increase. And that’s the only downside to the S Works – it’s not a really achingly must-have improvement over the already mighty quick Cooper S. Still, if you can afford it (and given that a Mini is quickly going to see the wrong side of £18K with the minimum of options, it might not be that much of a struggle) then it’s worth having, if only for the warm glow of satisfaction that you possess the ultimate in Minis.

On the subject of options, the panoramic glass sunroof (£670) is much better than the ones fitted to the first generation of new Minis. No longer do you get the wind noise when it’s closed, and the structural integrity seems unaffected this time around too.

The track is where the Clio should shine. And to some extent it does. The speed it can carry is huge and it’s easier to keep the engine screaming, though if you drop out of the top register it’s still frustrating. Although the chassis is more controlled, it’s also less indulgent than the standard 197, which loves nothing more than a bit of lift-off oversteer. You tend to throw the R27 around up to its limits and don’t bother going over them because it just doesn’t seem to bring any particular rewards.

The Mini feels initially softer: a bit more understeer on turn-in, definitely more roll through the corner, but it also has more adjustability to its attitude and requires more from its driver to get the best out of it. You get the feeling that the Clio would turn in virtually identical laps pretty much all day long. The Mini would be less consistent but the satisfaction of a good lap would also be greater. And when the Mini hits a good one it’s also just that bit faster.

So which superpower wins? Invisibility, undoubtedly. No, sorry that wasn’t an option was it. Mini wins because it’s more fun more of the time. You can see the philosophy behind the Clio – utterly focused on its ability to cover ground, purist in its high-revving naturally aspirated engine and beautiful in its functionality. You know that, given the right circumstances, it’s a fantastically talented and fun thing. It’s just a shame that those conditions are a tarmac special stage. In the Mini you can go into a corner at something other than the perfect speed and yet come out the other side without feeling it’s a wasted opportunity. It moves around, engages and involves more than the Clio. The fact that it feels significantly faster in a straight line is an added bonus that makes nipping in and out of the everyday traffic just that bit more fun. Mini Cooper S Works: everyday Hero.