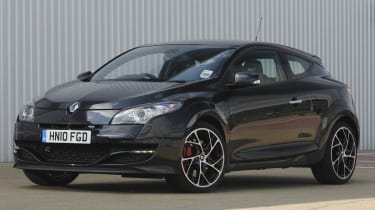 The arrival of a new long-termer is always a special moment, never more so than when you’ve been able to specify the exact colour, trim and options it has. So you can imagine my growing sense of anticipation as the delivery date for ‘my’ new Mégane 250 Cup grew near.

Like most manufacturers, Renault has an excellent online configurator, so I thought I had a pretty good idea of what to expect, but still I was surprised by how menacing the Mégane looked when I first clapped eyes on it.

Some elements of the specification chose themselves, such as the cloth Recaro seats (£860) and the Cup chassis package (complete with stiffer springs, dampers and anti-roll bars, a limited-slip differential and Brembo brakes – plus a £1000 saving over the slightly more luxurious non-Cup car). Others, such as the 19in Speedline rims with 235/35 ContiSportContact 5 tyres (£500) and the Pearl Black paint (£405) were the product of a more tortured decision process. I hope you agree the end result is pretty stunning.

I also ticked the boxes for the LED daytime running lights (£150) and the Renaultsport Monitor (£300), which is like a less glitzy version of the Nissan GT-R’s dynamic display. Amongst many other things, it allows you to choose between a handful of different throttle maps, time yourself around a circuit and conduct standing-start performance figuring. All harmless fun, really. The main downside is you can’t have it in conjunction with sat-nav. Still, at least I’ll know how many lateral G I’m pulling while getting horribly lost…

First impressions are of a Renault that’s better built and more classily designed than the previous Mégane. At £25,865 as tested that’s no less than you’d expect, but there’s no doubt the detailing is neater, creating a more ‘premium’ impression. It turns heads, too, but not in the look-at-me manner of Ford’s Focus RS, which is just too brash for my liking.

The interior is also a cut above the Ford’s. The Recaros look and, more importantly, feel extremely supportive, although you have to be careful not to trap certain parts of the male anatomy on the hard edge of the seat cushion. They haven’t been christened the Nutcracker Seats for nothing.

HN10 FGD arrived with almost exactly 1000 miles on its digital odometer, but it feels like it needs a thousand more before it’ll be truly run-in. The gearshift is tight, the clutch bites sharp and early, which can make for a few abrupt take-offs if I’ve been driving something else, and the engine feels like it needs a bit of spirited use.

I know some of you will feel the 19in rims are a controversial choice, but aside from the fact that I like the way they look, I genuinely thought it would be useful to see if they compromise the dynamics, as I’m sure some of you might be tempted by them too.

By the time you read this, the Mégane and I will have done a Renaultsport trackday at Spa-Francorchamps, together with staff writer Stephen Dobie and his Clio 200 Cup. Findings and pictures next month.