Beefed-up diesel Megane has been ‘developed and engineered by Renaultsport’ 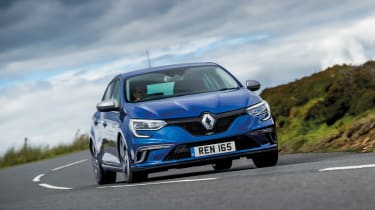 Up until now if you wanted a reasonably quick Renault Megane your options were limited -  the standard range of petrol and diesel engines left a lot to be desired on the performance front, with only the 202bhp GT providing a modicum of pace.

Although a full-fat, fire-breathing Megane RS is just around the corner, Renault has first decided to whet our appetites by offering a new, sporty diesel model – the GT dCi 165.

Set to rival cars like the Volkswagen Golf GTD, Peugeot 308 GT HDI and Ford Focus ST TDCi, the Megane GT dCi is available in hatchback and Sport Tourer estate bodystyles, and should appeal to those after a practical family diesel with a bit of shove behind it.

Under the bonnet sits a 1.6-litre diesel engine with twin-turbochargers, which Renault claims is the most powerful 1.6 on the market today. It’s mated exclusively to Renault’s EDC dual-clutch gearbox, with no manual option. Performance figures are a fairly disappointing, with an 8.8-second 0-62mph sprint and a top speed of 133mph. The Sport Tourer adds 0.1s, but top speed is identical.

The power figure of 163bhp is slightly down on rivals, compared to the GTD’s 181bhp, 308 GT’s 178bhp and Focus ST’s 183bhp. Perhaps the most disappointing part is that it doesn’t return better fuel economy – the Megane’s quoted 61.4mpg is a fair whack away from the 64.2, 67.3 and 70.6mpg quoted by the VW, Ford and Peugeot respectively.

However, the Megane hits back with the accolade of ‘developed by Renaultsport’ – amounting to new dampers, springs, and anti-roll bar settings - as well as some unique tech.

Chief among these is the addition of four-wheel steering, which Renault calls 4Control. Essentially, at speeds of under 37mph (or 50mph in Sport Mode) the rear wheels counter-steer to the front ones, aiding manoeuvrability. At motorway speeds, the wheels steer in the same direction, giving extra stability.

Inside, the usual sporty styling touches have been added – Renault hasn’t released pictures of the interior, but expect Alcantara sports seats, Renaultsport logos and blue stitching. The outside is a bit more dynamic, and features a wider air intake at the front, 18-inch diamond-cut alloy wheels and a glorious yet optional Iron Blue metallic paint job.  GT spec is at the top of the Megane range, so equipment is generous too.