Renault's titchy hot hatch, the Renaultsport Twingo 133, gets a mid-life overhaul to help it topple the new Swift Sport 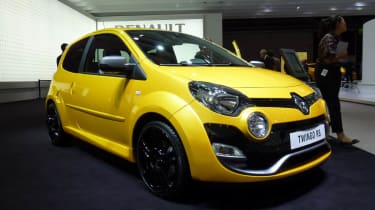 Renault has pulled the wraps off its new Renaultsport Twingo 133 and its Gordini trimmed cousin. The miniature hot hatchback has had a mid-life overhaul along with the regular Twingo range, and comes out of it looking a lot funkier and more aggressive than before. It’s said to be the first production car to feature elements of new design language previewed by recent Renault concepts, including the Dezir supercar.

The front end features numerous styling cues, with the ‘F1-style’ front bumper blade borrowed from the Twingo’s bigger Clio and Megane siblings, a striking new four-light setup and a set of 16in alloy wheels complete with ‘RS’ badge in the centre cap as opposed to the usual Renault diamond. The interior gets a minor refresh, with new white-themed trim making the cabin a little classier than before.

The 133 nametag hints at the same 131bhp (133ps) 1.6-litre naturally aspirated engine under the bonnet as before, a spirited unit that provides a big chunk of the little Twingo’s fun character. It should prove up the task of competing the second-generation Suzuki Swift Sport with its new 134bhp 1.6-litre engine. There’s no word on any chassis tweaks.

While prices for the new Renaultsport Twingo 133 have yet to be announced, expect to pay around £13,000 for a standard car, or £1000 less for a stripped out Cup version.Read about the Renault’s arch rival, the new Suzuki Swift Sport