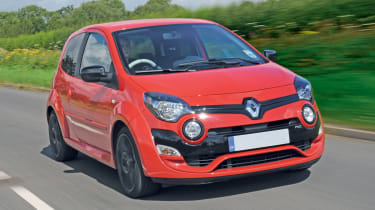 Renault tuning company K-Tec Racing has released a new tuning package for the Renaultsport Twingo 133, which sees peak power raised from the standard 133bhp, to 163bhp.

To increase power output from the naturally aspirated 1.6-litre engine in the Twingo, K-tec has developed a new tubular exhaust manifold, replacing the restrictive original. This is complimented by a full 2.5-inch sports exhaust system. A sports catalyst is also available at extra cost.

In order to take advantage of the engine’s better breathing, K-tec will then install a set of Cat Cams stage one high-lift camshafts. Despite the more aggressive cams, the company has claimed to have retained a factory-smooth tickover. The ECU is then re-mapped, delivering the full 163bhp.

The price for the full package comes in at £2625, including all parts and fitting – and is covered by a 12-month warranty. The exhaust and camshaft packages can also be bought separately, available for any Twingo 133 model from 2008 onwards.

Without a turbocharger, the Twingo will never have the punch to take on the Ford Fiesta ST and Peugeot 208 GTIs of the world - that's the job of the bigger Clio 200 Turbo. Like the Suzuki Swift Sport however, the Twingo remains one of the few affordable naturally aspirated performance cars, with a manual gearbox, that you can buy today.