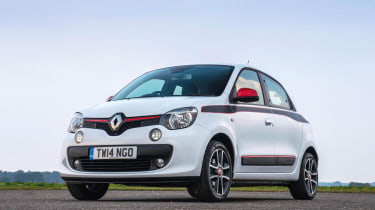 The last generation Renaultsport Twingo 133 wasn’t that fast, but proved that speed wasn’t necessarily a requirement for fun thanks to a darty chassis and effervescent character.

The new Renault Twingo is very different from its predecessor, but in absence of a true Renaultsport model – expected soon – the new Twingo Dynamique S TCe 90 will have to fill the gap.

That’s enough urge for a 10.8sec 0-62mph sprint (making it one of the quickest city cars on the market) and a 103mph top speed. When you’re not exploring either of those two figures, the Twingo’s official combined economy figure sets a target of 65.7mpg and 99g/km of CO2. 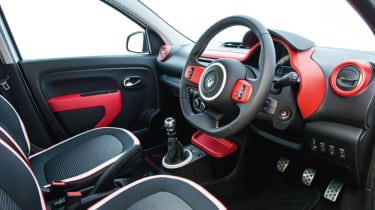 To create the Dynamique S, Renault has taken the regular Dynamique model and applied the optional Sport Pack as standard equipment. Exterior alterations are largely visual rather than mechanical, with 16in alloy wheels joining matte black side decals and red detailing on the grille, mirrors and side rubbing strips.

The price of all this sporty tinsel is £12,545 on the road (with a healthy four-year warranty), while deliveries are expected to begin in April 2015.