It may have been the baby of the range, but the Twingo 133 is still very much a true Renault Sport car. And they now start at just £2,500 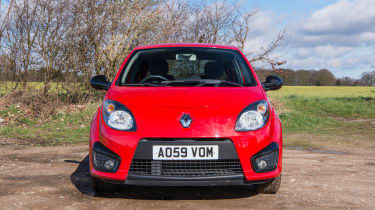 Slightly less hardcore than the Twingo, particularly when the Renault is in Cup form, the 134bhp Swift is still a great drive in its own right. £3000-4500 gives a wide choice.

There are plenty of Coopers, both first and second generation, for £3000-4000. They’re not quite as feisty as theTwingo, but they are still fun. Ubiquity puts some people off, though.

Privately advertised early cars with higher mileages go for as little as £3000, with similar high-milers at traders from £3500, either way you’re looking for evidence of meticulous upkeep. Keep in mind the major service due at six years or 72,000miles. If it’s nigh, use it as a bargaining chip to lower the price. Buying privately, £3500-4000 should get you a nice 2009-2011 example with average miles and a solid history. Post-facelift cars are £5000-plus.

‘Push hard and you will find understeer, but the way the Twingo changes direction with so little fuss means you don’t often breach the slip barrier. The ESP stability program is well judged, too. I don’t find myself searching for the off switch for ages...

‘Get the orange button glowing, pin the throttle and the Twingo is with you every step of the way. There’s a hunger for corners that’s invigorating – even if the steady trickle of information is fed back to you through the chassis rather than the steering. Electric steering is to blame, robbing the Twingo of true clarity. At least the helm is accurately and consistently weighted with a pleasingly quick rack – half a turn of lock deals with most corners. 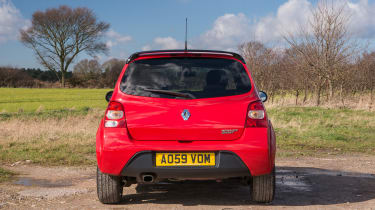 ‘The brakes are meaty underfoot – developed for the Mégane, they’re reassuringly positive – and when the rev needle homes in on 7000rpm (and the tuneful 1.6 begins to sound just a touch ragged) the change-up light glows green. That’s green for go, grab another gear, give it some. It’s a small thing, but it matters somehow.’

‘I saw this car advertised in Newcastle for £3000. I drove all the way up from Hertfordshire to see it, part-exchanged the Clio, then drove the 133 back home. That was just bags of fun. After the Clio, I couldn’t believe how fast it was! 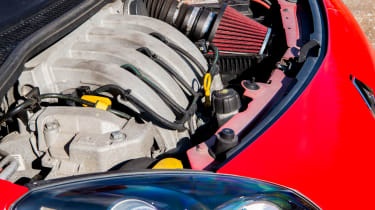 ‘It’s a 2009 car with the Cup chassis, which is what I really wanted. I know it’s pretty uncomfortable on some roads, but I didn’t buy it for comfort. I just love the way you can throw it around. It feels so agile. ‘It had 70,000 miles on the clock when I bought it five months ago, and I’ve already added 10,000 to that. I drive it a lot! I drive into London every day for my job as a carpenter, and I also go and visit my family down in Cornwall, so I really rack up the miles.

‘I’ve had four of us in it, which was just about OK. And one day the van at work had broken down, so I loaded up the Twingo instead – timber, tools, great big bundles of nails. It was probably slightly overloaded, to be honest, but it was fine.

‘What’s gone wrong? Not much really. I broke a wishbone and that cost about £180 just for the part – luckily my stepdad is a mechanic so I could get it fitted for free. I had to replace a wheel bearing, too. And the exhaust had a leak, but I’ve managed to patch that.

‘I’ve had the wheels powder- coated black to make it a bit more stealthy. I’m now planning some modifications, starting with a set of coilovers. I’m also looking at getting a turbo. The insurance? I’ll worry about that when it happens!’