This MGB is effectively brand new, with a 304bhp Mazda engine. It costs an eye-watering £96k and it's worth every penny 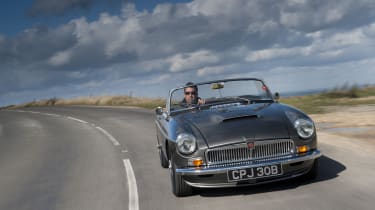 No, your eyes aren’t deceiving you. This is a £96k MGB Roadster. Built by marque specialists Frontline Developments, the Abingdon Edition might look like a freshly restored original but, in what soon becomes a common theme, little about this car is what it seems.

The result is 304bhp at 6800rpm and 241lb ft at 5200rpm, sent to the rear wheels via a Mazda six-speed manual gearbox and a limited-slip differential. Given the MGB weighs just 897kg, that’s enough to propel it to 60mph in a claimed 3.8sec and on to a top speed of 160mph. That’s very serious performance in 2014, let alone when packaged into a small ’60s sports car.

The more you delve into the Abingdon Edition’s build and specification, the more gems you find. Electric power steering with adjustable assistance means you don’t have to heave and heft at the wheel. Dynamat sound-deadening brings increased refinement and decreased levels of road noise; Dynaliner heat insulation on the floor, bulkheads, doors and transmission tunnel keeps unwanted mechanical heat-soak at bay, but ensures the heater is as effective as possible on chilly autumn and winter days. Conversely, air-conditioning will keep you comfortable during the summer.

An open-top British sports car, fast, sweeping country roads and a crisp, early-autumn day help make for a memorable drive, but the Abingdon Edition requires no rose-tinted glasses. The engine is absolutely razor-sharp and blessed with a fabulous, hard-edged soundtrack to match. The gearbox shifts so sweetly you can’t help but snap up and down the ’box just for the sake of it, heel-and-toeing on the downshifts for maximum grin factor.

The gearing itself is short, but not ridiculously so. In fact it’s the perfect antidote to modern cars and their absurd long-striding ratios. I’m talking to you, Boxster and Cayman. In outright terms the acceleration is really very impressive, not big-power-Caterham urgent, but not far off. The MGB’s slim hips and low weight ensure you’ve got plenty of road to play with, and you’re soon pitching it through bends with absolute confidence, trusting the road-holding, the responsive front end and the inherent front-engined, rear-drive neutrality, but enjoying the fact you can play with it on the throttle at sane speeds. In short, it’s an absolute hoot.

Bumpy roads eventually unsettle it: there are times – most often on fast straights at elevated speeds – when you find yourself bobbing up and down in the extremely comfy (heated) bucket seat. It’s the only time you feel Frontline hasn’t quite managed to transform or conceal the age and flaws inherent in a five-decade-old design.

The brakes feel a bit soft for my liking, but when I mention this to Frontline they smile and explain that the car did have a harder pedal and sharper response, but they changed the master cylinder and tried some different pads after another journalist  thought the brakes were too sharp! In a roundabout way that illustrates how each car is tailored to its owner, so I have every faith Frontline could finesse the brakes to how I’d like them. Sadly without the requisite £96k I’m unlikely to find out for sure.

On purely rational terms it's hard to make a case for an MGB costing nearly £100,000, but since the Abingdon Edition is likely to be part of a collection of vehicles rather than purchased in place of similarly-priced cars, it's probably not much of a concern.

Supposing you've scrimped and saved your entire life for a distinctive, high-performance vehicle built to exacting standards and have similar money to burn, there are several other vehicles you might consider alternatives. A BMW i8 is about as far removed technologically from an MGB as it's possible to get, but at £99,845 it's also a hugely compelling hundred grand sports car. A Porsche 911 Carrera S Cabriolet is too at £92,204 and represents a more typical take on high-performance, open-topped motoring.

When it comes to paintwork and interior trim, you have a limitless choice of colours and treatments. Finished in a metallic grey taken from Aston Martin’s palette, then given a twist with a hint of brown in the clearcoat lacquer, Frontline’s demo car really makes the most of the MGB’s pure and pretty lines. Inside, swathes of Connolly leather upholstery look, feel and smell magnificent. Bespoke Smiths period instruments, a chunky Motolita steering wheel and a simple black Bakelite gearknob that fills your hand perfectly are the finishing touches.

There’s something truly compelling about the work Frontline is doing, and it’s a feeling I’ve experienced twice before. The first time was when I drove an Eagle E-type, the second more recently in a Singer 911. On both occasions I arrived questioning the sense and sanctity of re-imagining such iconic cars, but left cursing the fact I’m unlikely to ever have the means to buy one. And now I can add a Frontline MGB to my Lottery win-funded fantasy garage.

Find used MGB's for sale on the Classic and Performance Car site here.