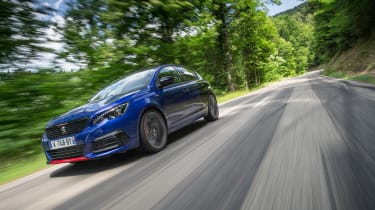 The Peugeot 308 GTi has been a firm evo favourite ever since bursting onto the scene in 2015. While it lacks the upmarket polish of the VW Golf GTi and the performance per pound served up by the SEAT Leon Cupra, the fast French hatch has compensated with its entertaining chassis and smattering of exotic mechanical additions.

So when it came time to treat the pugnacious Pug to a mid-life refresh, bosses decided to keep their meddling to a minimum. In fact, you’ll need your best anorak on to spot the changes to the exterior, where the only clue that this is the ‘new’ model is a larger grille and reprofiled headlamps, which combine to give the car a similar look to the firm’s 3008 crossover. Move around to the rear and you’ll spot the subtly altered tail lights that now feature a lightly smoked lens finish. There’s also a number of new colours, including the distinctive – or divisive, depending on your point of view – Coupe Franche in Magentic Blue and Black Perla Nera featured on our car. At £1,300 it’s a combination you’ll have to really like.

> Click here for our group test between the Hyundai i30 N, VW Golf GTI and this Peugeot 308 GTi by PS

You’re likely to have even more trouble spotting the changes inside. As before, Peugeot’s i-cockpit layout dominates, with its high set dials and teeny-tiny steering wheel. It looks a little odd at first, but you quickly get used to it, while the high-backed seats feel soft yet provide good support. The cabin’s also robustly built from high grade materials. 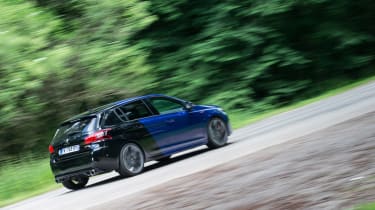 Look harder and you’ll notice that the infotainment system is a little different. There’s the familiar 9.7-inch screen and layout, but the graphics have been improved to deliver crisper resolution, plus there’s now Apple CarPlay and Android Auto. Better still, the capacitive touchscreen is more sensitive, meaning there are far fewer instances when you have to tap the display two or three times to get a response.

As with all family cars, the 308 is now available with all the latest de rigueur safety kit. Lane keep assist, active blind spot assistance and adaptive cruise control with autonomous emergency braking can all be added for £500.

Under the very subtly revised exterior, the Peugeot is identical to the old car. Like, exactly the same. However, given the 308’s remarkably exotic specification for a mid-ranking hot hatch, it’s always worth revisiting the specifications.

At the heart of the car is the subtly upgraded 267bhp 1.6-litre four-cylinder that debuted in the much-missed RCZ-R coupe. Packing forged Mahle aluminium pistons, a twin scroll turbo and circuit racing inspired exhaust manifold, the unit delivers harder hitting performance than its small capacity would suggest. 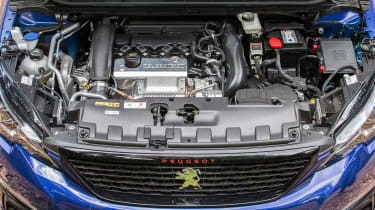 The engine is mated to a six-speed manual gearbox – there’s no auto option – that drives the front wheels through a Torsen limited slip differential.

Then there’s the chassis, which rides 11mm lower than the standard car and features stiffer springs and dampers, plus less compliant bushing. The front track has also been widened by 10mm, while the 19-inch alloys are wrapped in Michelin Pilot Super Sport rubber.

On the move it’s immediately clear the 1.6-litre doesn’t have the elastic low down punch of the larger capacity engines fitted to its VW Group rivals such as the Golf GTI and SEAT Leon Cupra, but once the unit spins smoothly beyond 3,000rpm the 308 accelerates with real vim – Peugeot claims 0-62mph in 6.0 seconds, which feels entirely plausible.

Keeping the engine on the boil is made easier by the six-speed manual gearbox. It doesn’t have the mechanical precision and short throw of the Honda Civic Type R’s similar transmission, but it’s accurate enough and has a reasonably slick action, plus it’s matched to a progressive clutch pedal. 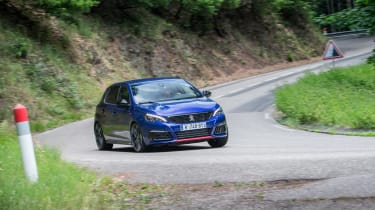 Driver modes are kept to a minimum, with a choice of Normal and Sport settings. The latter delivers a slightly sharper throttle response plus it turns the back-lighting on the dials from white to a menacing red. Unfortunately, it also pipes an artificially rorty engine note into the cabin. For this reason alone the Sport button is best left alone.

If you’ve driven the old Peugeot 308 GTi, then you’ll feel right at home here. And if you haven’t, then you’re missing out on a hidden hot hatch gem.

The secret of the Peugeot’s success is its brilliant chassis that seamlessly melds engaging handling with the sort of easy going ride that takes the sting out of mundane day-to-day duties.

As before, the steering is well-weighted and boasts a natural rate of response, plus there’s just enough feel to make things interesting. The Michelin Pilot Sports grip hard, while the Torsen front differential allows you to get on the power way earlier than you’d expect. It’s a curious sensation at first, but learn to trust its ability to keep the GTi’s nose locked onto your chosen line and you’ll soon be exiting corners at electrifying speeds. There’s some wheel tug when accelerating hard on bumpier roads, but it’s nowhere near bad enough to offset the huge traction benefits. 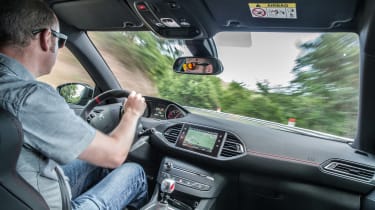 There’s genuine adjustability in the car’s balance, too. Lift off the throttle or brush the brakes mid corner and you can feel the rear axle go light and the nose tucking in. It never gives the impression it’s going to wildly break free; it simply heightens the feeling of agility and gives the driver options.

When you want to slow things down a little, the massive 380mm front brakes offer tireless stopping and beautiful progression, once you’ve got past the sharp initial bite that can make progress in town a frustratingly jerky affair.

Elsewhere, passive dampers control body movements extremely well, while also delivering a reasonable ride. Yes it’s firm, but the suspension rounds off any sharp edges. Factor in the reasonably low levels of wind and road noise plus the spacious cabin and roomy boot, and the 308 is a car that’s as easy to live with as it is fun to drive. Just like the old car, in fact.