Not as sensible or solid-feeling as some rivals, the SUV-style Ignis can still raise a smile 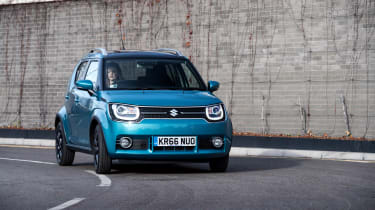 In its previous incarnation, the Suzuki Ignis was something of an unexpected hit at evo. Not in normal trim of course, but as the Ignis Sport. Ideally painted banana yellow, the slightly naff but brilliantly fun Sport set the stage for the Swift Sport that would follow, and gave Suzuki some success on the rally stages too.

There’s no Sport version of the new Ignis, but the quirky upright proportions and SUV-aping styling remains (with a hint of the old Whizzkid of the 1970s in its details) and Suzuki has kept the mechanicals simple, ensured it's light weight, and priced it sensibly too. So is there a hint of evoness to the new car as there was its predecessor?

All Ignis use a 1.2-litre four-cylinder petrol engine badged Dualjet, producing 89bhp at 6000rpm and 89lb ft of torque from 4400rpm. From there options differ, with standard cars sending drive to the front wheels through a five-speed manual transmission (as driven here), but others offering a five-speed automated manual, while range-topping cars pair the five-speed manual with Allgrip four-wheel drive. 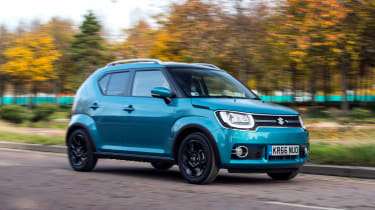 The four-cylinder starts quickly and quietly, and most of the time it remains fairly silent. Naturally, there’s not a lot of performance to call upon, but there’s reasonable throttle response and a light gearshift, so the old joy of driving a slow car quickly, stirring the gearbox to extract every ounce of power and pinning the pedal to the floor, is rarely far away. You won’t be rewarded with a stirring engine or exhaust note, but you do get the unexpected joy of having pedals quite nicely placed for heel-and-toe downchanges.

Undoubtedly the Ignis’ most impressive technical feat is its light weight. Basic models have a quoted kerb weight of just 785kg, while even the 4x4 is a blowaway 860kg. For reference, the stingiest VW Up is a 929kg car, a basic Fiat Panda 940kg, while even the dinky Smart Fortwo somehow weighs in at 30kg more than the Ignis 4x4.

Suzuki has long offered all-wheel drive on many of its models and the Ignis continues this with its Allgrip system. While there’s no extra ground clearance à la 4x4 versions of the Panda, it gives the Suzuki a layer of extra ability not offered by most rivals. 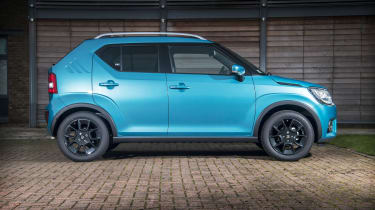 Photos do a good job of hiding just how small the Ignis looks as you approach it. Despite the SUV-like proportions it’s still only 1595mm tall, and it feels almost toy-like as you get within a few paces. The height does benefit interior space however, so there’s an airy feel once you clamber inside, helped by the upright windscreen, narrow pillars and box-like internal dimensions.

A smattering of bright trim helps lift the cabin too, and there’s a modern feel - but pry too closely and you’ll notice some flimsy elements (the lower console moves quite alarmingly if you lean your leg against it) and cheap-feeling plastics. It may dissuade anyone used to scaled-down big cars like the VW Up, but it’s generally pleasant in here, and neatly styled too.

Wiggle the wheel and you’ll find steering is as light as the gearshift, and it’s rendered so as much by skinny 175-section Bridgestones and the car’s light kerb weight as it is any assistance. There’s not enough response initially, but accurate enough thereafter. You’ll not find much feedback either and grip is limited too, but the Ignis is at least happy to be thrown around, its inside wheel scrabbling for grip out of tighter turns and generally feeling quite enthusiastic and inertia-free. 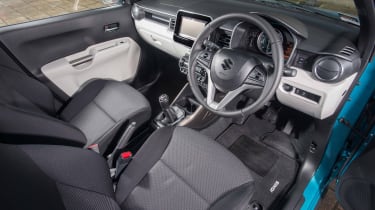 The ride quality is surprisingly pliant too, given the requirements of making a narrow car stable and the fairly unsophisticated beam rear axle, though on roughly-surfaced country roads you’ll be being jiggled around in the seat. And while those seats are fairly comfortable in normal driving, they offer no side support whatsoever, so you’ll find your limbs splayed like a spider’s in an attempt to brace yourself through a series of turns. It’s all part of the character of a small car, really.

The range begins at £10,499 and goes no higher than £14,499 for the Allgrip. Not an expensive car then but one that sits towards the upper end of the city car class - as you might expect given Suzuki already sells the Celerio for those on a real budget. Fuel won't be a huge expense though - when we weren't driving enthusiastically, the Suzuki's fuel computer headed straight for mpg figures in the 60s.

SUV styling hasn’t really reached this class just yet, with only the Fiat Panda offering similarly rugged looks in certain models - £12,995 buys a Panda Cross in front-wheel drive form, while £14,605 buys a TwinAir-engined Panda 4x4, closely matching the Ignis Allgrip’s pricing. Volkswagen’s Up (along with the SEAT Mii and Skoda Citigo) is still the car of choice in this segment, but if you can’t abide by Volkswagen Group products then the characterful Ignis is very much worth a look for a bit of low-cost motoring fun.