They might not have the following of their Gallic contemporaries, but these hot 90s Fiestas still have a sting in the tail 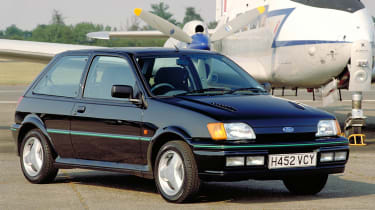 There’s no denying Ford had lost its hot hatch mojo by the early Nineties. While the Fiesta XR2i looked the part (who doesn’t like blue piped bumper trim and quad fog and driving lights?) against the likes of the Peugeot 205 GTi, Renault Clio 16V and even the Fiat Uno Turbo, the soggy, half-baked Ford was a bit of a joke. Not only was it hobbled by an asthmatic fuel-injected version of harsh and tingly 1.6-litre CVH engine, it had a chassis that was as taut and communicative as a mute couch potato. Ford’s marketing might and some choice discounting helped it sell, but there was a pressing need for a proper drivers’ car.

Help came in the form of Ford’s Special Vehicle Engineering (SVE) department, which had previously worked its magic on the Capri 2.8i and the Sierra XR4x4. Tasked with transforming the Fiesta this dedicated band of engineers delivered the RS Turbo, which was much more than an XR2i with some extra puff. It still wasn’t quite a match for the deft and delicately balanced French opposition, but the boosty and brawny RS brought some much-needed excitement.

> Click here for our review of the Renault Clio Williams

Eventually it was replaced by the naturally aspirated RS1800 – a car that was more sophisticated than its predecessor, but sadly couldn’t live up to the legend of the hallowed badge, which was formerly affixed to the rump of one of the greatest MK2 Escorts ever.

Neither Ford Fiesta is a paragon of the hot hatch species, but as characterful alternative to the norm, and prime slice of prime Nineties nostalgia they’re hard to beat. Both cars are rare too, so you’ll be making more of a statement than with the ‘me too’ 205 GTi. Of course, exclusivity comes at a price, meaning you’ll probably need to budget around £10,000 for a nice RS Turbo and around half that for the RS1800. 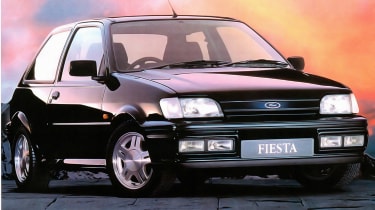 The Fiesta RS Turbo and RS1800 in detail

Appearing around a year after the rest of the third generation Fiesta range was launched, the RS Turbo landed in showrooms in mid-1990. On the face of it the newcomer appeared to be little more than an XR2i with the engine of an Escort RS Turbo dropped into its stubby nose. But there was a bit more to it than that. Yes both car’s shared the same 1.6-litre CVH four-cylinder, but the Fiesta benefitted from a smaller Garret T2 turbo (the Kevcort, sorry Escort had a larger T3), which spooled up at lower revs for greater response and therefore less lag. Also ditched was the Bosch engine management system, Ford favouring instead it’s more powerful EEC IV set-up. Finally, the head was taken from the XR2i and there was a bespoke manifold. The result was a similar headline power output of 133bhp, but the torque peak of 134lb ft arrived with a whoosh at just 2400rpm. The same tried and tested Ford B5 five-speed gearbox was used, but the Fiesta has a lower final drive for even more eager response.

To help the driver grapple with this boosty bonanza some tweaks were made to the XR2i’s suspension, which was your standard hatch combo of MacPherson struts at the front and trailing arms connected to a torsion beam at the rear. Adding to the XR2i’s lowered and stiffened set-up, the RS Turbo added a 20mm rear ant-roll bar and some camber and castor changes, plus a quicker steering rack (although the unassisted set-up was still a dizzying four turns lock-to-lock). What was missing was the Escort’s limited slip differential, while the brakes were standard XR2i (240mm discs at the front and 203mm drums at the rear) apart from the use of fancy Ferodo pads that used the same friction material as the Sierra RS Cosworth. As with many Fords of the time, the Teves mechanical anti-lock braking system was available as an option. 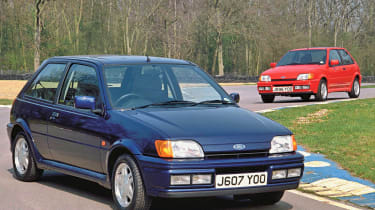 As with any Fast Ford, the exterior of the RS Turbo was designed not to leave other road users guessing – if you’ve got it, flaunt it. The blue pinstriping of the XR2i was replaced with – arguably even cooler – green, while the bonnet was hacksawed to accommodate a pair vents. Finally there was a colour coded tailgate spoiler and set of 14-inch three-spoke alloys wrapped in wide, for the nineties, 185 section tyres. Colour choice was limited to Radiant Red, Diamond white, Black and Mercury Grey metallic, while late 1992 cars were available with Moondust Silver. Inside there was a pair of hugely supportive Recaro seats, plus a light grey leather finish for the three-spoke steering wheel and gearknob.

A change of emissions legislation for 1993 (all new cars needed catalytic convertors) meant the RS Turbo was ditched after just two and replaced by the RS1800 in 1992. To use a badge that evokes images of big-arched MK2 Escorts skittering sideways through the forest, trailing a BDA wail in their wake probably wasn’t the wisest move, but while Fiesta RS1800 can’t live up to this heritage, it’s not as bad as you’d think. Crucially, the last run of RS1800s in 1994 were based on the MK3.5 Fiesta, which looked very much similar to the 1989 original, but incorporated a number of changes that would pave the way for the sharper MK4 ‘fishface’ model. This meant a switch to a stronger bodyshell, plus a redesigned underbonnet area that allowed the fitment of power steering for the first time. These changes brought a welcome dose of agility to the driving experience, but as we shall see the updates came with some cost cutting to the kit.

> Click here for our review of the Ford Escort Mexico

Powering all RS1800 models was the new Zeta (soon to be renamed Zetec after Ford a licensing row with Lancia) engine that had first been seen in the facelifted Escort and all-new Mondeo. Packing 1.8-litres, twin cams and 16 valves it was Ford’s most advanced unit in years, though still fairly rough and ready even by the standards of the day. Boasting 105bhp in standard tune, in the RS1800 it benefitted from larger throttle body of the 2.0-litre, higher lift cams and a remapped EEC IV ECU, bringing power up to 130bhp and torque to 120lb ft at 4500rpm. These figures were lower than the RS Turbo’s, meaning a drop in performance (the 0-60mph sprint increased from 7.7 seconds to 8.1 seconds, while top speed dropped from 132mph to 127mph), but the more linear deliver helped tame the Turbo’s more exuberant handling traits.

The suspension was the same as the RS Turbo’s, with the exception of a slightly thicker front anti-roll bar, plus the 1994-on availability of power steering which resulted in a less arm-twirling lock-to-lock figure on about three turns.

Visually the RS1800 owed a lot to the RS Turbo (and the XR2i, which now had the 105bhp version of the 1.8-litre Zetec), but with a more muted mid-Nineties twist. Gone where the green stripes (replaced with black trim inserts), and while early cars had orange indicator lines, later models got clear items. The wheels were changed too, the Fiesta featuring 14-inch facsimiles of the MK5 Escort RS2000’s five-spoke affair. Post 1994 cars gained the power steering option and stronger bodyshell, but they also saw the alloy rims dropped to the options list, while inside the supremely comfortable Recaros were ditched in favour of Ford’s own wing-backed design.

Despite serving the same market, these two cars couldn’t be more different to drive. For good old-fashioned fun, the RS Turbo is hard to beat. It might not have been able to rival the Peugeot 205 or Renault Clio for poise and engagement, but there’s no shortage of exhilarating, hang-on-for-dear-life fun. Lag is limited by the standards of the time, but compared to modern machinery the Fiesta’s ‘pause...whoosh’ approach is addictive. The physicality extends to the driving experience, with the unassisted steering proving to be a device you wrestle rather than guide the Ford through a corner – it’s particularly bicep busting under hard acceleration, where torque steer adds an extra direction changing option. Yet like most aging performance cars there’s a real sense of connection. While the thudding low speed ride gives way to surprising suppleness and control, although we’re talking relatively here – it’s no modern hot hatch, and it was still not in the same league as its Gallic contemporaries either. 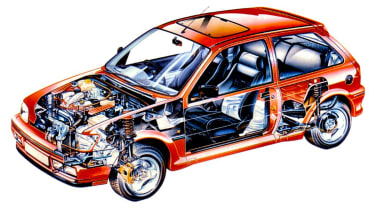 The later RS1800 added some extra finesse, particularly the later power assisted cars, which feel more nimble as a result of their quicker racks and lower effort. Yet most of this increased feeling of sophistication comes from the engine which, while no jewel in the manner of a Honda VTEC, at least delivers its power smoothly and controllably. The flipside is that this civility highlights some of the chassis shortcomings and robs the car of the RS Turbo’s more boisterous character. As a result it’s no surprise to find it’s the forced induction Fiesta that attracts the stronger following and higher prices, with decent cars starting at not far short of £10,000 and minters coming in at near double that (try not to remind yourself you could have a brand spanking new Fiesta ST for that, or that the RS Turbo cost just £11,950 when new). The longer lived but less loved RS1800 is more affordable, with ratty ones coming up for around a grand or so, while low mileage and refurbished (yes, there are people restoring these cars) fetch north of £5000.

We won’t try and pretend that either of these cars can hold a candle to a Peugeot 205 GTi, but as rare examples of a time when pocket rockets delivered light, simple and uncomplicated fun, these fast Fords represent a surprisingly entertaining trip down memory lane.