Fast, good looking, and more involving than its predecessor 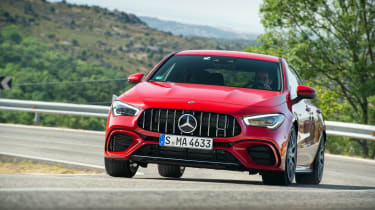 If you’ve had your eye on an Audi RS3 Saloon, then the new Mercedes-AMG CLA45 is Affalterbach’s effort at tempting you away from the five-cylinder car, and into the most powerful 2-litre car currently on sale.

That alone will be a selling point for some, and along with the latest CLA’s sleek styling and a cabin like no other in the class, the latest CLA45 is off to a far better start than its predecessor ever was. Can the CLA45 succeed where the old car did not?

In format alone the new CLA45 is much like the CLA35 offered below it in the CLA range. There’s a two-litre, four-cylinder turbocharged engine, an eight-speed dual-clutch transmission, and power is sent to all four wheels.

The drivetrain is quite comprehensively reworked, however, AMG even going as far as to rotate the four-pot by 180 degrees, so the intake side now faces forwards and the turbocharger and exhaust towards the rear of the car. A host of upgrades, from roller bearings for the turbine, through extra cooling for the turbo and improved valves, injection, cooling and a baffled sump for the engine, allow the four-pot to deliver its new class-leading output. 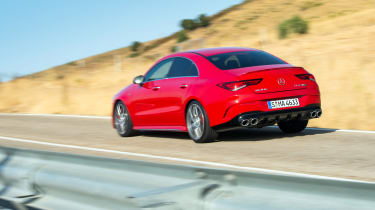 Peak power is now 382bhp in CLA45 trim (which won’t reach the UK) and 416bhp for the CLA45 S, with maximum torque outputs of 354 and 369lb ft respectively. These figures are good for a 0-62mph time of as little as four seconds flat, and an electronically limited top speed of 168mph in the more potent S.

All-wheel-drive traction helps, particularly when the car is fitted with the new AMG Torque Control set-up at the rear differential, with a pair of multi-disc clutches to meter out torque to each wheel. This set-up, similar to that in the Focus RS, allows for a new drift mode.

Aside from the engine improvements, the CLA45 also gets comprehensive bracing throughout the chassis, cutting down on torsional twist. The front and rear subframes are also rigidly mounted, as is the rack for the variable-ratio steering. The CLA45’s dampers, like the A45’s, use both frequency-selective technology (which uses internal valving to allow pliancy over rough surfaces but simultaneously allows for good body control) and are adjustable via the car’s driving modes.

We tried the CLA45 after the A45, and while both are largely identical under the skin, the CLA’s extra length (it’s 4695mm long, compared to the A45’s 4445mm) and resulting changes to weight balance have an effect on the car’s balance.

Essentially, there’s just a little more momentum to the rear of the car. The difference is slight, but driving each in the same fashion, you’ll find yourself relaxing the steering more often in the CLA, as turning into and powering out of a given corner, the rear end will slide just a touch more than it will with the A45’s docked tail. 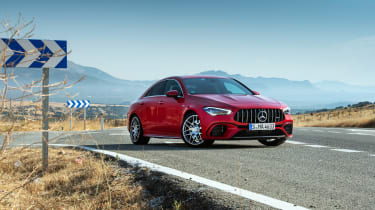 Equally, steering seems a tad lighter, as if a smaller proportion of the car’s mass is resting over the nose. The CLA45 already has fairly light steering, though when you twist the driving mode dial on the steering wheel around to Sport+ – which turns everything to its most aggressive, but keeps systems like stability control in play – the steering’s response and weighting feel just about right, and there’s even a murmur of feedback through the rim.

Even if there wasn’t, you’d struggle to get into trouble with the CLA45. The nose follows steering inputs with a tenacious hold on the road and virtually no body roll. Only on one section of road, weathered to a glassy smoothness, did the front end lose bite, and that was regained instantly with a small lift on the throttle. Lift more and the front end tucks, while lean on the power hard and early and the CLA just digs in, hooks up and swings you around the inside kerb like a water bucket on the end of a rope.

There’s certainly plenty of power to meter out too. The engine’s peak torque figure is quoted as delivered between 5000 and 5250rpm, but this doesn't do justice to an engine that punches hard from as little as 2000rpm.

In Sport+ you’re accompanied by a roar from the exhaust and a less appealing roar from noise pumped into the cabin, but it’s dramatic and exciting, and gearshifts with the paddles do little to hinder your forward progress. 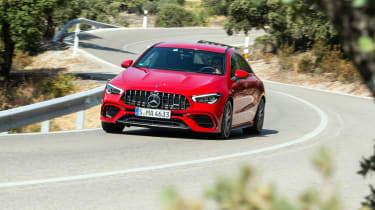 Overall, the CLA45 is a far better effort than its predecessor; quicker, better to look at, more pleasant inside, and with a more adjustable and involving chassis. If there’s one downside, it’s price: Mercedes has now confirmed full UK pricing, with the CLA45 S to start at £52,145.

That’s a reasonable chunk more than the £47,285 Audi RS3 Saloon, which falls short on power next to the AMG (and isn’t as involving), but does get you an extra cylinder and a more rousing soundtrack.