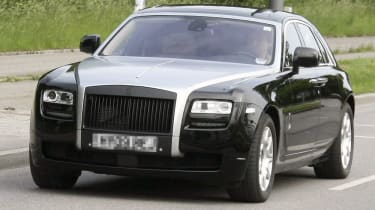 The new Rolls-Royce sports saloon is edging closer to production. The Ghost, which was named at the recent Shanghai motor show, is set to look almost identical to the 200EX concept car that the British luxury firm revealed at Geneva earlier this year.

As a result, this test car has been spotted with minimal disguise, with little left up Rolls’ sleeve as far as styling goes.

What this car does reveal is that the Rolls-Royce Phantom’s rear-hinged suicide doors remain intact, while the brushed stainless steel bonnet and windscreen surround that’s a highlight on the Drophead Coupe also features, although it’s likely to be an option rather than standard.

At the heart of the Ghost is an all-new (and bespoke to Rolls-Royce) 6.6-litre turbocharged V12. In the company’s own words it will have ‘upwards of 500bhp’ and it’ll be mated to an eight-speed ZF automatic gearbox.

That puts it at least 50bhp better off than the bigger, heavier Phantom, making this the more sporting choice in the Rolls range. The fact that underneath it shares parts and development with the BMW 7-series only serves to heighten the dynamic attributes of the Ghost.

We should see the production Rolls-Royce Ghost in the coming months, with sales starting early next year. Despite it being the baby of the range, you’ll still be looking at £175,000 to secure one. Like the Phantom, coupe and convertible versions will follow this saloon.