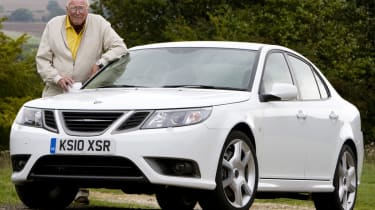 Saab has revealed a 9-3 Aero Carlsson edition. Celebrating the 50th anniversary of Erik Carlsson’s first RAC Rally victory (the first of a hat-trick, in his 750cc Saab 96, pictured right), it evokes memories of Saab 900 and 9000 Carlsson sports saloons of old. Equipped wih a 2.8-litre V6 turbocharged engine, it boasts 276bhp and 295lb ft of torque, enough for a 0-60mph sprint time of just 6.9sec, while Saab’s famed in-gear shove is present, with a 6.3sec 50-70mph time. Top speed is limited to 155mph. Power is transmitted to the road via Saab’s XWD all-wheel-drive system, complete with an electronic limited-slip differential at the rear. Exterior flourishes include a set of 19in six-spoke alloy wheels, twin exhaust pipes, a rear spoiler and titanium-finish detailing. Erik (who is now 81) should be used to having cars named after him by now, but he’s still apparently over-the-moon about the latest Saab Carlsson – ‘I’m very proud to have such a great car named after me,’ he said. ‘Anyone who loves driving and is as passionate about the Saab brand as I am, will be excited about getting behind the wheel of this car.’ And who are we to argue… Just 96 will be made (a neat link back to Erik’s Saab 96), priced at £26,495, around 20 per cent cheaper than the price of the late Saab 9-3 Turbo X (review here) whose engine it shares. Click here for evo’s Saab 9-3 Turbo X review Here’s what we think of the all-new Saab 9-5 Modern day rally stars as 2011 WRC cars revealed