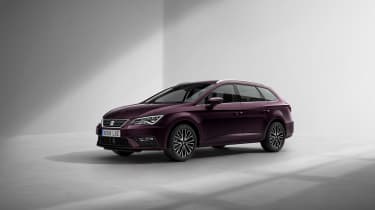 SEAT has announced updates to its strong-selling Leon for the 2017 model year. In addition to refreshed styling, the updated range - there's no all-new model just yet - gets a new engine lineup and the firm's latest driver assistance and connectivity technology.

You'll have to be a particularly keen SEAT fan to spot the visual changes without the pre- and post-facelift models parked side-by-side. In essence the sheet metal looks much the same and only details separate Leons old and new.

The largest detail change is the new grille. Again, tough to spot without comparison, but SEAT says it's 40mm wider than before and features a 'richer chrome' finish. No, we don't know either - but to our eyes it makes it even more difficult to separate the Leon from the smaller Ibiza, at least at the front.

There has been some reprofiling of the Leon's character lines, but this needs even more studious examination than the new grille. The same applies to the interior: There was very little wrong with it to begin with, but SEAT has worked to reduce noise levels, quality has improved, and a new 8-inch touchscreen results in fewer buttons. More of that in a bit.

In the engine room there have been greater changes. The range gets a new 114bhp, 1-litre three-cylinder turbocharged powerplant (already seen in the VW Golf and Audi A3) and there's a 1.6-litre, four-cylinder diesel boasting the same power output. A 148bhp 2-litre diesel is also available with a new 7-speed dual-clutch gearbox, and a 181bhp diesel tops the oil-burning range. 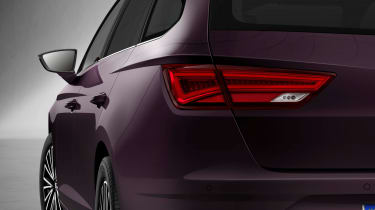 Until a refreshed Cupra arrives - and SEAT says that will be soon - the top petrol lump is a 178bhp 1.8-litre TSI. A new Xcellence trim line joins the range as a luxury-orientated range-topper with a smattering of chrome and some 'distinctive and comfortable' upholstery.

And so to infotainment and connectivity, where Leon models shed buttons for a new 8-inch touchscreen. The old touchscreen was hardly difficult to use with its simple buttons along each side, but we'll wait and see how easy the new unit is to use - SEAT has told evo previously that it prioritises ease-of-use and minimal distraction in its in-car systems.

Other features joining the Leon range include Traffic Jam Assist that accelerates and brakes the car automatically in traffic at speeds of up to 37mph, as well as Adaptive Cruise Control and a Pedestrian Protection System. Media features include SEAT Full Link, the optional SEAT ConnectApp (which recognises voice commands and gesture control), and wireless smartphone charging.

UK pricing hasn't yet been revealed, but it's unlikely to differ greatly from existing models, which are at their cheapest (£17,400) in three-door SC form with the 1.2-litre TSI engine and SE trim.