Skoda Kamiq spied before Geneva reveal – yet another tiny SUV

The third SUV in Skoda’s line up will be the smallest yet, with big sales expectations 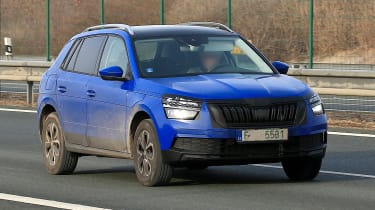 Skoda is to follow its Volkswagen Group siblings by launching a tiny B-segment SUV in the mould of the SEAT Arona and Volkswagen T-Cross. Joining the Skoda Karoq and Kodiaq, the new Kamiq (we’re sensing a pattern here) seen in these spy shots appears to remain relatively faithful to the sketches so far released by Skoda.

The new Kamiq will ride on the simplified MQB-A platform that underpins other small SUVs from the group, as well as the Polo, Ibiza and the next Fabia too. Judging by this, we suspect that the Kamiq will be a front-wheel drive only proposition, thanks to the platform’s torsion bar rear suspension – a detail made clear from these spy images. Engines will likely span three- and four-cylinder petrol engines, and four-cylinder diesels, connected to manual and dual-clutch automatic transmissions.

Oliver Stefani, Skoda chief designer, said: ‘In our new Kamiq city SUV we’ve implemented a completely new headlamp configuration. The two-part headlamps with daytime running lights above are a first for Skoda. They give the Kamiq a unique appearance and represent another interpretation of our successful SUV design language.’ 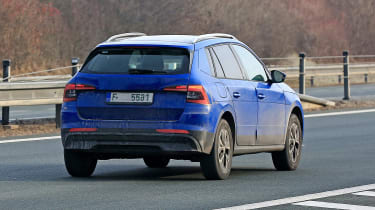 A wide, distinctive grille, with double slats – a typical feature for Skoda’s SUVs – also features at the front, with lines leading to the slim daytime running lights above the main headlight cluster. A wide intake section below also gives the model a wider appearance, with an overall, upright design pointing towards its rugged nature.

Moving to the side of the car, what Skoda calls a ‘tornado line’ gives it a longer, sleeker appearance, in conjunction with the ‘dynamic’, sloping roofline. A first for a Skoda SUV in Europe, the brand name is also spelt out in letters, as opposed to using the logo at the rear. Despite the car’s sleek design, it also features high ground clearance for off-road use.

Skoda also provided us with a look at the interior of the Kamiq, showing a large, freestanding infotainment screen above the centre console, new ‘crystalline structure’ finish on various surfaces and the way in which the design ties in with the exterior of the car. Despite its likely budget position in the market, the model also sports one of the largest virtual cockpits in the sector at 10.25 inches, as well as ambient lighting in either copper, red or white. Other optional extras include heated rear seats, steering wheel and a heated windscreen. 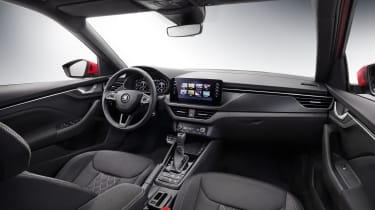 The marque also revealed that the MQB-based car would have a wheelbase of 2,651 millimetres and a boot volume of 400 litres (1,395 litres with the rear seat backrests folded down), making it a direct competitor to models such as the Nissan Juke.

Pricing information is yet to be revealed, however with the model due to sit below the Karoq and Kodiaq, expect prices to start from less than £21,000 when it goes on sale.

The world premiere of the Skoda Kamiq will take place in Geneva this March.