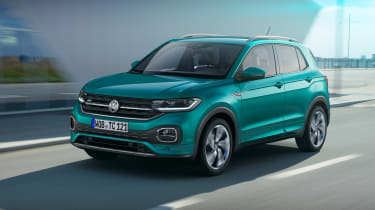 Volkswagen is continuing the rapid expansion of its range of SUVs, revealing a fifth model for the line-up. Called the T-Cross, its compact dimensions allude to its entry-level status: it sits beneath the hardly massive T-Roc, where it will rival other small SUVs such as the SEAT Arona, Mazda CX-3 and Vauxhall Crossland X.

The ingredients are not surprising, comprising components from the Polo/Ibiza including its three- and four-cylinder engines and six-speed manual and seven-speed dual-clutch transmissions. The top-spec petrol model uses the same 1.5-litre EVO four-cylinder turbocharged unit with 148bhp and is paired exclusively to the DSG, while entry-level models use Volkswagen’s refined 1-litre three-pot in 94bhp and 114bhp forms connected to manual gearboxes (DSG is an option on the 114bhp). A 1.6 TDi diesel is also available with both transmissions.

> Click here for our review of the Volkswagen Golf

As the T-Cross is built on VW’s simplified MQB A0 platform, there is little chance of it being offered with all-wheel drive, so don’t hold your breath for a hot R version (unlike the Tiguan and T-Roc, which should both get the performance treatment in due course).

The design is typical modern VW, projecting a solid, Germanic image with just enough youthful touches to keep it interesting. It’s more upright and a fair amount shorter than the T-Roc, being just 54mm longer than the Polo supermini. However, the wheelbase is comparatively long considering the car’s modest overall length, so interior space should be reasonable. Around the upright rear is a new full-width section of black panel that doesn't look too dissimilar to that on a Mk2 SEAT Ibiza, helping the T-cross look a little more distinct from its larger relatives.

The interior is about as predictable as the exterior, combining a design clearly inspired by the Polo, which is not necessarily a bad thing. The eagle-eyed of you will see a new steering wheel, but aside from that, the high-mounted infotainment screen, optional digital dials and general control interface are all familiar from many VW models, so should be easy to navigate. Volkswagen has tried to jazz things up a little bit with a geometric pattern on the dash and seat fabric, all of which will vary depending on the model and trim level, but it does at least attempt to brighten up the fairly demure interior ambience.

Despite its entry-level status in the VW SUV range, the T-Cross still has plenty of equipment such as LED headlights, those digital dials, automatic parking and a high-end stereo. In classic German style, however, expect many of these to be bundled into option packs, but if the funds are there, you can have them…

UK pricing and specs have yet to be confirmed, but with the T-Roc flying out of showrooms, we suspect this T-Cross will also prove popular when it goes on sale early in 2019.