SEAT's Arona is one of the bigger entertainers in this class, but not yet an alternative to a hot supermini for people like us 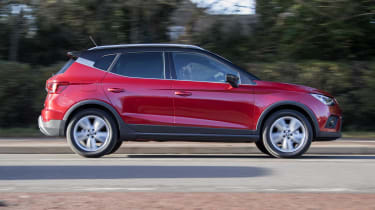 Like many car manufacturers, SEAT’s range used to be quite simple. Twenty years ago it comprised the Arosa city car, Ibiza supermini, the Cordoba (an Ibiza with coupe, saloon and estate variants) and the Mk2 Golf-based Toledo saloon.

Nowadays there are ten SEATs to choose from (a relatively small number compared to some) and the waters are muddied further by the Arona and Ateca, necessary inclusions (at least for manufacturers) in the crossover/SUV space. They’re finding an increasing number of buyers, which is great for manufacturers but typically not so great for car enthusiasts, with crossovers being inherently compromised by their tall shapes and extra weight.

Still, the SEAT Arona is fairly small as crossovers go, and SEAT isn’t above making relatively normal vehicles fun to drive, so how does the Arona fare in natty FR Sport trim?

The Arona FR Sport can be specified with a 1.5-litre turbocharged four-cylinder making 148bhp, but as tested ours used a 113bhp 1-litre TSI with three cylinders. It’s effectively the same engine you’ll find in the VW Up GTI, with the same 148lb ft of torque from 2000rpm and the same six-speed manual transmission, but without a thrumming exhaust note piped into the cabin.

With extra weight to deal with the Arona is a second slower to 62mph than the Up GTI but still nicks under the ten-second mark, at 9.8sec. Top speed is 113mph, which is more than most owners will experience, but on the road the FR Sport feels good for both these figures and pulls with reasonable verve and minimal histrionics through each of its gears. There’s no diff trickery, but the Arona appears not to need it, at least with this powerplant. 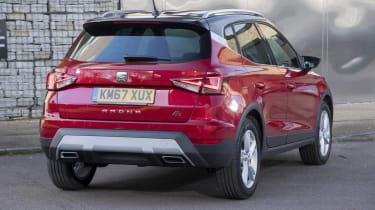 Nothing particularly unique here, with the Arona sitting on the VW Group’s MQB A0 platform also used in the Ibiza, Volkswagen Polo and others. You get a steel monocoque chassis with MacPherson struts up front and a torsion beam rear, with electric power steering. In 1.0 TSI manual form it weighs in at a respectable (for the class) 1187kg, 40kg more than the equivalent Ibiza.

FR Sports also get 18in alloy wheels and Dynamic Chassis Control adaptive dampers, and the driving modes on offer can firm up those dampers in Sport, as well as reducing steering assistance and improving throttle response.

On a very basic level the Arona has much the same family feel as any other car in the Volkswagen Group, and particularly those on a derivation of the MQB platform. Familiar characteristics include low noise and vibration levels, good body control paired with a relatively supple ride, over-servoed brakes, a light and oddly mechanically-disconnected feel to the gearshift, and a direct and frictionless feel to the steering rack.

To this the Arona FR Sport’s adaptive dampers can provide a firmer ride, less steering assistance and sharper responses to your right foot. Switching between the two on a familiar, poor stretch of asphalt suggests the ride doesn’t change dramatically, and in corners the extra steering weight has more of an effect on how the Arona behaves. 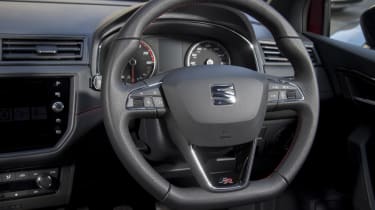 The extra weight is welcome given how light the standard helm feels. You gain nothing in feedback but it feels more natural when pitching the car into a turn, and with good front-end grip to lean on (tyres are reasonably meaty 215/45 R18s) the FR Sport resists understeer well and doesn’t object to quick direction changes.

If that sounds like damning the Arona with faint praise then perhaps that’s unfair, as in many respects the Arona is more engaging than the conventional Ibiza on which it’s based. The Ibiza is so neutral and tied-down as to feel tediously grown-up, but the Arona’s extra body roll (however slight) and corresponding raised driving position actually feel more like superminis used to.

It’s perhaps pushing it to call the Arona FR Sport a true entertainer, but the engine is a game partner, and among the better small-capacity three-cylinder units on the market in terms of refinement. There’s reasonable throttle response, minimal flywheel effect when you demand quick gearchanges, and it uses seemingly no fuel - on a motorway trudge from Northamptonshire to Heathrow and back it returned nearly 60mpg. 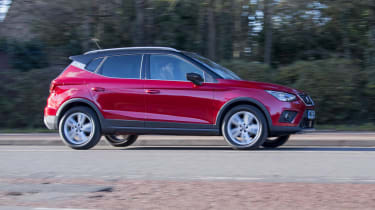 One car that did provide entertainment in this class (albeit more for some drivers than others) was the Nissan Juke Nismo RS. It packed a 215bhp engine and limited-slip differential, but Nissan has quietly discontinued that model in the UK so cars like the Arona FR Sport are as spry as it gets these days.

With the Nissan gone there’s also little to highlight that a £20,860 price tag (the 1.5 TSI EVO version is £22,235) is actually a fair chunk of money for cars with relatively little power; the Juke at least gave you hot supermini performance for its £22k-or-so. Still, the Arona is a damn sight cheaper than its Volkswagen T-Roc cousin (£26,640 for the 1.5 TSI EVO R-Line).

You might wish to consider the Mazda CX-3 as an entertaining alternative, with a 118bhp 2-litre Sport Nav available for £20,795, while the punchiest Citroen C3 Aircross (with a 128bhp 1.2-litre three-cylinder turbo in “Flair” trim) is considerably cheaper at £18,845. Considerably less sporty too, but if you were serious about thrills and want a relatively compact car then the VW Group also sells the Polo GTI, which starts at £21,520. Better yet, there’s the new Fiesta ST, at a fiver under £19,000...