Latest Juke rival joins the fray, with 148bhp FR model at the top of the range 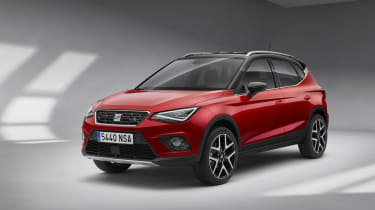 SEAT has officially unveiled its new compact crossover. Known as the Arona, it's the latest option in a fiercely competitive and fast-growing market segment kicked off by the Nissan Juke back in 2010.

Not, you might think, the most exciting new product you've seen this week, though a dashing of evoness comes in the form of the FR model that will join the range at launch, available both with the Volkswagen Group's impressive 1.4-litre turbocharged four-cylinder engine with cylinder deactivation, and an all-important six-speed manual gearbox.

Performance figures haven't yet been revealed - those are likely to follow when the Arona makes its official public debut at the Frankfurt motor show this September - but the four-pot develops a healthy 148bhp, with 184lb ft of torque from 1500rpm. 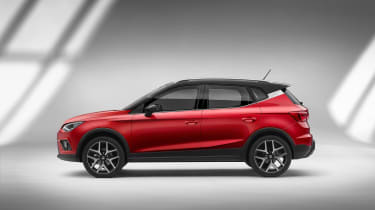 The same engine moves the outgoing Ibiza to 62mph in 7.6sec (the latest Ibiza gets a new 1.5-litre unit) so expect brisk performance, if not quite within reach of the only true performance option in this segment, the Juke Nismo RS and its seven-second sprint.

> Nissan Juke review - still fun and funky, but no longer the best

Like the latest Ibiza, the Arona is based on the MQB A0 platform - a compact platform based on the now widely-used MQB arrangement, allowing huge flexibility in manufacturing. The Arona stretches 4138mm long, making it 79mm longer than the Ibiza, but stands 99mm taller at 1543mm, allowing the driver to sit 52mm higher and still benefit from extra headroom. 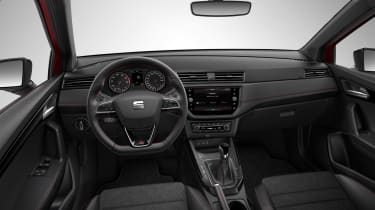 Weight figures haven't been revealed, but the Ibiza is relatively light (starting at 1091kg) so the Arona should follow suit. It's also likely to share the Ibiza's grown-up feel and improved quality, while the taller body may actually add some character to dynamics which, in the Ibiza, are almost too tied-down to enjoy the chassis.

Naturally, technology and connectivity will feature heavily. FR cars get adaptive suspension and Normal, Sport, Eco and Individual driving modes. Apple CarPlay, Android Auto and Mirror Link connectivity are all standard, while ambient lighting and dual-zone climate control will be available depending on the model.

As will numerous personalisation options, from two-tone paintwork for the body and roof (with up to 68 combinations) to alloy wheels and interior trims. And plenty of safety and convenience tech, including keyless go, adaptive cruise control, auto lights and wipers, blind spot detection and more. Pricing and full specification details will be revealed closer to the car's launch.