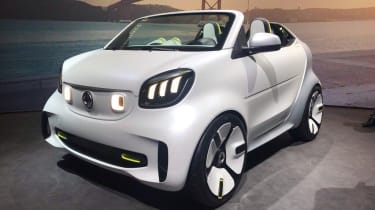 Pollution-choked city centres don’t seem like the ideal place for driving around with the roof down, but that hasn’t stopped Daimler’s city car brand Smart from revealing its latest roofless take on the Smart Fortwo in an event prior to the Paris motor show, two decades on from the first Smart car hitting the roads.

The concept, making its debut at this year’s show, goes by the name ‘Forease’, and follows on from the Forspeed concept shown in 2011 and the Smart Crossblade, actually released as a production car in 2001, in lacking any sort of roof, or even weather protection, beyond a small windscreen.

Like the Forspeed but unlike the production Crossblade, the Forease uses a fully electric drivetrain, and the concept itself is driveable, based on a standard production Smart EQ Fortwo.

The Smart brand as a whole will sell only electric vehicles from 2020, so we'll have to get used to the drivetrain. It’s not a bad sign of how far even basic electric vehicles have come along since the Forspeed concept debuted, given the production EQ Fortwo (and therefore the Forease) develops 82bhp to the Forspeed’s 47bhp, in a similar footprint. 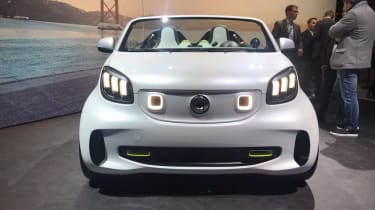 Less impressive is the increase in range over that time, from 84 miles from a 16.5kWh battery pack to 96 miles from 17.6kWh. No range is quoted for the Forease concept, but once again it shouldn’t differ greatly from the production car.

It’s somewhat academic anyway, since there are no plans to produce the Forease. Instead it’s Smart trying to be playful and whimsical, perhaps dreaming of a future when city driving isn’t the crawling, particulate-inhaling nightmare of modern-day London, Paris or Rome.

There is a lot to be said for Smart’s approach with the Forease. It’s small, which is a good start, and electric, which also makes sense for short distances and moves pollution away from urban centres. Smart’s keen to point out that the roofless format puts the driver in touch with their surroundings, and anyone who has ever spent time with the roof down in a convertible, particularly at lower speeds, will know there’s some truth in that. 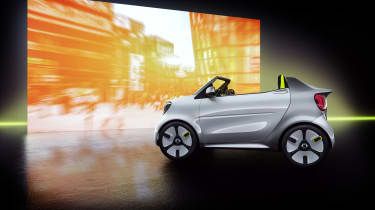 Chirpy detailing and a crisp green and white colourway certainly present a friendlier image than most inner-city traffic, though the enormous 18-inch wheels, neatly styled though they are, don’t promise a city-suitable ride quality.

The cabin is largely production Fortwo, though the redundant centre air vents have been replaced by circular displays, and there are speakers in the humped panel behind the seats.

If there’s a disappointment it’s that the styling really isn’t a great leap on from that seven-year-old Forspeed concept, which itself was an early look at the direction Smart would take for the current Fortwo, launched in 2014. For a concept, some Crossblade-style silliness – no doors perhaps, or a hose-down interior – would have been welcome.

What we’d really like to see though is Smart revisiting a proper sports car format, as it did with the short-lived Smart Roadster from 2003 to 2006. With electric sports cars still seemingly reserved for those with seven-figure budgets, a more affordable electric roadster would be a real breath of fresh air.