In conjunction with the Viziv Performance Concept and its STI sibling, Subaru has revealed the Viziv Tourer. 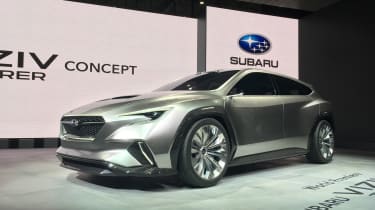 Subaru has chosen the Geneva Motor Show to pull the covers off its Viziv Tourer. Following on the from the Viziv saloon and STi concepts (unveiled at the 2016 and 2017 Tokyo shows respectively), the latest design study points to a long awaited successor to the Impreza WRX estate.

Details are thin on the ground, but Subaru claimed the crossover-inspired Viziv Tourer is powered by a boxer engine and features a version of its trademark symmetrical four-wheel drive. There is no word on what gearbox the car features, but given the car is claimed to benefit from a host of autonomous driver technologies it’s likely the transmission will be a development of the brand’s Lineartronic CVT set-up. 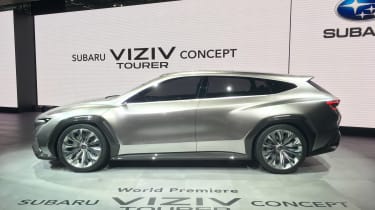 While details of the mechanical and performance are sketchy to say the least, visually the Subaru ticks all the right boxes. The gaping trapezoidal grille is a familiar design cue, but it sits above a bumper that features some aggressive vents and large splitter. Set into the bonnet is Subaru’s trademark bonnet scoop that presumably feeds an intercooler for what could be a turbocharged flat-four. In keeping with the car’s rugged crossover remit the Viziv get chunky cladding for the wheelarches and sills, although the textured weave in the finish suggests a lightweight material has been used.

Subaru claims the Vizev has been designed to features latest in autonomous technology. Included in the specification is the brand’s own Eye Sight system that utilizes a pair of cameras to build up a full colour stereoscopic picture of the road ahead. However, unlike the current production set-up that mounts the chunky cameras either side of the rear view mirror, on the Vizev they appear to be mounted in the roof. For extra accuracy the set-up is said to work in conjunction with radar and a very precise GPS navigation system.