Engine, chassis and interior tweaks for Subaru's twin to the Toyota GT86 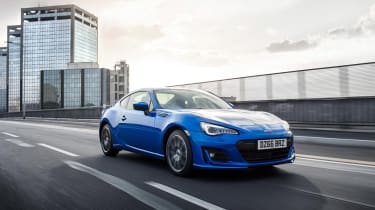 As with the broadly identical Toyota GT86, Subaru has revealed a host of small improvements to its BRZ sports car for the 2017 model year.

The updates, says Subaru, cover virtually every area of the car, including its styling, interior, powertrain, suspension and safety - though as with many mid-life facelifts, you'd be hard pressed to spot the changes at a glance.

Visual alterations include a slightly wider front bumper designed to improve aerodynamics, but more significant for most drivers (and to the car's visual appeal) are the new all-LED headlights.

The rear lamps have also been redesigned and undoubtedly for the better, with a more sophisticated design that edges further away from the spangly early-2000s tuning scene look of the original units. There's a new spoiler too, which unfortunately does look like it's been pinched from a yoof's Civic circa-2002, and a set of new ten-spoke alloy wheels. 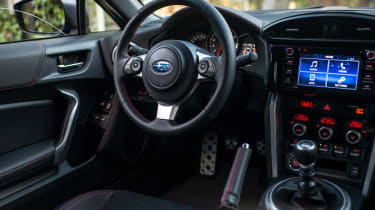 No power improvement is quoted - Toyota's updated GT86 moves from 197bhp to 202bhp, so expect an identical increase in the BRZ - but better responses and greater fuel efficiency are the claimed benefits.

Cornering (one of the few areas where Toyota and Subaru differed) has been improved with uprated dampers, cutting body roll and improving comfort. A 'Track' mode allows a little more freedom from the stability control and changes the throttle's response curve.

The most notable changes may be in the cabin. There's new leather and some slightly bulky looking buttons for the redesigned steering wheel (claiming another victim in the war against button-free 'wheels), higher quality cabin materials, and a 4.2-inch multi-function display integrated into the instrument panel. Inside the fat new steering wheel, there's also a new airbag.

No pricing information has yet been confirmed but the BRZ range has been consolidated into SE Lux specification alone. That may raise pricing from the current £22,495 of the entry-level SE to nearer £23,995 of the current SE Lux. A manual gearbox is standard, and an automatic is available, if you absolutely must.