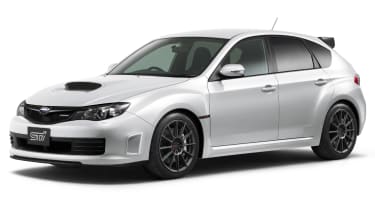 Meet the new special model Impreza from the boffins at Subaru’s performance arm, STI: the R205.

Based around the 2009 WRX STI Spec-C and developed during the Nurburgring 24 hour endurance race, there are several upgrades over the normal STI that set the R205 apart.

The main area STI has tweaked is the suspension. Specially tuned dampers and coil springs are employed, and work with a flexible front strut bar and lower arm stiffener to keep the specially designed Bridgestone RE070 rubber (wrapped around cast 18” wheels) firmly on the ground. Behind the lightweight wheels sit Brembo brakes - six-pot at the front and four-pot at the rear.

Power is 316bhp, and comes from the classic 2-litre boxer four-cylinder, with a new ball bearing turbo to aid spool time. The exhaust is also new, creating less backpressure and making use of a revised sports muffler. An ECU tweak is the final piece in the power puzzle.

Distinguishing the R205 from lesser cars in Subaru’s arsenal isn’t easy. There’s an STI bodykit (which apparently improves aerodynamic performance), an R205 grille at the front and a small badge on the back. Interior tweaks are a couple of R205 sill plates and a serial number plate. It’s safe to say Subaru are intending on letting the performance do the talking.

Only 400 of these cars will be made and all will be sold in Japan, so the only way to get your hands on one is to stick it on a boat and import it. The cost in Japan will be 4,510,000 Yen (£30,395), which is a smidge more expensive than the cheapest 296bhp Mitsubishi Evo X available over here, and over a grand less than the Impreza STI 330S. That makes the R205 seem decent value for money.

Is the current Impreza STI capable of gunning down a Gallardo?