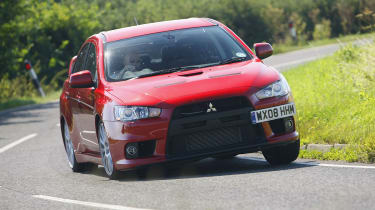 Muttering something about the attendant at his local petrol station having put a restraining order on him due to fears of stalking, John Simister has returned the Evo X to Evo Towers.

Despite a less than glowing report when it was pitched against the Impreza STI in evo 118, I really wanted to drive it again, so I snaffled the keys, opened the featherweight door and slid into the high-backed Recaro. First impressions were, sadly, just as I’d remembered – a slurring clutch as you pull away and an engine note duller than a PowerPoint presentation in a warm room on a summer’s afternoon. Nevertheless, I pushed on out of the car park. And three-quarters of a mile later I was glad I did. WX08 HHM and I were barrelling along.

Smooth road, ‘ninety left’ ahead. Braking later than usual – the Evo’s Brembos are undoubtedly some of the best stoppers on any car available today – I could feel the tail go light before I flicked the left paddle for a too-late-for-a-manual downchange to second. Then, bleeding off the brake pedal whilst turning in, the X instantly adopted that wonderfully familiar pose, taking attitude and drifting all four wheels on the way into the corner. All that was left to do was pin the throttle and hold the slide out the other side. It’s never been easier.

The rest of the drive home was, predictably, a riot and continued to be revealing. I still have a problem with the X’s front end, which feels almost artificially sharp a lot of the time; fun for twitching it into slides but slightly irritating when you just want to turn-in cleanly. The damping, however, is hugely impressive, staying awesomely composed over bumpy sections that would have most cars pogoing wincingly. Very rally car. You seem to naturally short-shift the engine too, riding out a punchy band of smooth torque – exactly as (name drop alert!) Marco Martin had done when I sat next to him in Subaru’s new WRC car at Goodwood.

In the end I drove the Evo for some weeks, during which time I also discovered that the lightly treaded Yokohamas are terrible in the wet, the stereo sounds brilliant (it also helpfully records any CD you put into it onto a hard drive) and, bizarrely, you can remove the key from the ignition and be almost out of the car before the engine turns off.

I’d still rather have an Evo IX, but the X and I have definitely bonded.