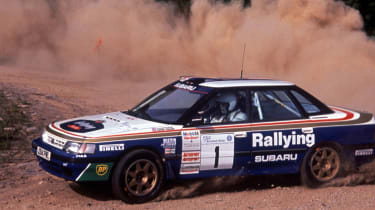 Billows of reddish-coloured sand, a sideways Subaru – it has to be another image of McRae from Rally Australia, surely?

A fair assumption, but one disproved by closely examining the number one plate on McRae’s Subaru Legacy RS – placing the car at the Scottish Rally.

This very car, J314 PWL, went up for auction in 2007, shortly after McRae’s death. At the time, the car was owned by Martyn Spurrell, an ex-Prodrive engineer and now a broker in the classic car market. It was listed under a £70,000-£100,000 estimate, but the car was withdrawn before the auction.

There’s no doubt it was competitive in its day. Following a restoration in Spurrell's hands, the car achieved 304bhp at 6500rpm on the dyno, and 400lb ft of torque at 5000rpm. Drive was sent to all four wheels (naturally) via a six-speed, non-sequential Hewland transmission. On McRae’s preference, it ran a locked rear differential, while both front and centre diffs were of the limited-slip type.

While not as instantly recognisable as McRae’s blue and gold Imprezas, the Rothmans livery is still among the most recognisable in rallying, having also graced MkII Ford Escorts, Porsche 911s and BMW M3s over the years.

McRae was dominant in 1992. Defending his 1991 title, McRae proved victorious in all six rounds of the series. While he didn’t take the 1993 WRC title, McRae did give the Legacy its first WRC win, at New Zealand in 1993. No wonder McRae’s family described the Legacy as ‘the most significant car of his career’ back at the auction listing in 2007.