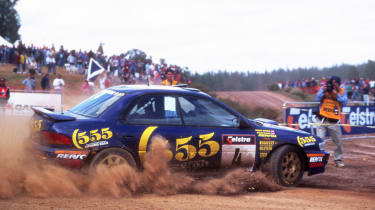 McRae didn’t quite replicate his success at Rally New Zealand in the other antipodean round of the 1995 season, but with a second-place finish his strong run towards the end of the season would continue at a pace.

Kenneth Eriksson instead took victory in the Mitsubishi Lancer Evolution III – his second of the season, and making Team Mitsubishi Ralliart’s decision not to have hired him for all eight rounds of the season seem unwise.

Indeed, given Toyota’s exclusion at the next round – and with it, the disqualification of Juha Kankkunen and Didier Auriol from their third and fourth place championship positions, Eriksson would have finished an even stronger third place in the title – perhaps challenging Sainz for second – had he taken part in more than four rounds.

McRae’s second place certainly wasn’t a surprise. Like New Zealand, the Australian stages seemed ideally suited to the Scot – he’d won there in 1994 (with Eriksson and Kankkunen also on the podium, as in 1995), and later won in 1997 in the Impreza WRC.

The Australian stages were, and still are, among the most unique on the WRC calendar. Notable mostly for their reddish sand and gravel mix, they’re also home to one of rallying’s most famous spectator points – the Bunnings Jumps.

This series of launchpads is spectacular at the best of times but Colin’s ‘if in doubt, flat out’ style proved hugely popular with fans, and the Scot would regularly put more dusty air under his car than his competitors. Faster? Occasionally, perhaps, but mainly just crowd-pleasing.

Unfortunately, today’s image (courtesy of Prodrive) doesn’t show McRae’s Subaru catching air, but it does give you a good idea of Australia’s characteristic red soil.