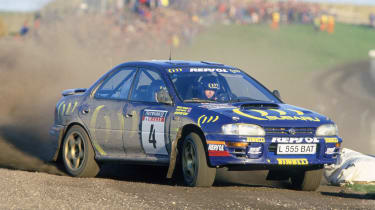 1995 isn’t just the 20th anniversary of Colin McRae’s WRC victory, but also of the car that bears his name.

While McRae drove for several teams during his rallying career, most notably Ford and later Skoda, it is with Subaru that he is most frequently associated.

McRae joined the Prodrive Subaru squad in 1991 to compete in the British Rally Championship at the wheel of a Group A-prepared Subaru Legacy, moving up to the WRC squad full-time in 1993. In 1994, the team entered the newly-launched Impreza for its first full season.

While the new car with its shorter wheelbase took some getting used to, it was instantly competitive, and McRae’s teammate took the model’s first victory that year on the Acropolis Rally.

It was McRae’s victory on the 1994 Network Q RAC Rally that convinced Subaru to produce a special edition model. Named the Series McRae, it celebrated the Scottish star’s status as the first British driver to win the RAC Rally since Roger Clark’s win in 1976.

Little did anyone know that McRae would become world champion a year later, but the timing of the road car’s launch in 1995 certainly proved fortuitous, and the Series McRae is now one of the most sought-after early Imprezas.

A coat of blue mica paintwork and a set of 16-inch gold-finish Speedline wheels define the car’s exterior styling, echoing the colour scheme of the rally car and setting a trend for special Imprezas to follow.

Inside, the Impreza Turbo’s lacklustre standard front seats made way for a pair of Recaros with embroidered Series McRae motifs, while the seats, rear seats and door trim panels all featured a special material design. A numbered placque left buyers in no doubt as to the model they’d purchased; nor did Series McRae decals on the sides and rear of the car.

Some owners opted to fit an additional Prodrive Performance Pack, which lifted power from the standard 208bhp to nearly 240bhp. In total, only 200 examples were made.

It’s by no means the most desirable Impreza to have hit the streets – that honour probably falls to the wide-bodied Impreza 22B that aped another of McRae’s cars, the 1997 Impreza WRC – but for rally fans of a certain age, no other car represents McRae’s success like that original blue and gold special.