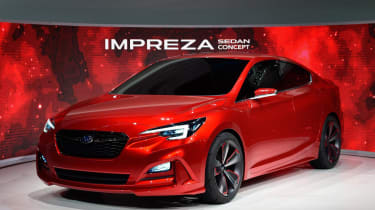 Subaru has followed up its Impreza 5-door concept at the Tokyo motor show last month with a sleek saloon version, at the Los Angeles auto show.

Like its five-door equivalent, the concept previews the next generation of the Japanese firm’s Impreza entry-level model, and signals a styling direction for Subaru’s upcoming models.

Resplendent in a coat of ‘Ruby Red Metallic’ paintwork, the Impreza has never been so easy on the eye. While much of the car’s styling is likely to be toned down for production, the basic shape suggests Subaru is finally ready to join its peers in the 21st century with a coupe-like roofline, carefully-considered surfacing and shapely headlights and tail lights.

The front end is an evolution of Subaru’s current look, though much more cohesive. ‘Hawk-eye’ headlight units, whose motif is echoed on the rear lights, flank a hexagonal grille familiar from Subaru’s production models.

At 4555mm long, 1880mm wide and 1453mm high, it’s actually a little shorter than the current WRX STI sold in the UK market, but wider and lower, for more pleasing proportions. A relatively low bonnet line is aided, as ever, by Subaru’s use of flat-four engines.

Prominently flared arches hint at another of Subaru’s USPs, that of an all-wheel drive powertrain. No definite drivetrain details have been revealed – it is, after all, still a concept – but power is put to the road through 19-inch alloy wheels and 235/40 R19 tyres.

You can follow more from the Los Angeles auto show on our dedicated hub page.