Piloted by rally driver Mark Higgins, the Subaru performed runs up and down the course 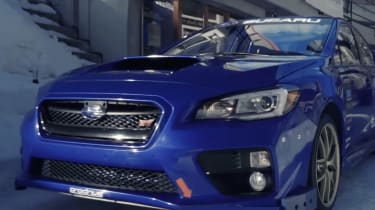 Could this be the hottest (or coldest) new winter sport? Subaru has released an incredible video of WRC driver Mark Higgins pushing the WRX STI to the extreme – not on road or on track, but on a bobsled course.

Once Subaru was done showing off at the Geneva Motor Show, it packed up and headed east to St Moritz, home to the oldest bobsled course in the world. It’s also the only Olympic bobsled course which isn’t artificially cooled – it’s kept cold entirely by nature's chill.

The rally-bred Subaru WRX STI is used to some challenging terrain, but is the oldest bobsled course in the world just...

The Subaru WRX STI used in the amazing run was fitted with studded winter tyres, and behind the wheel was Manx rally driver Mark Higgins. A British Rally Championship driver, Higgins is no stranger to stunt driving, having worked with Top Gear’s former Stig Ben Collins as well as on the James Bond films Quantum of Solace and Skyfall.

The two-minute video is packed with action, as Higgins fights the car on the incredibly narrow bobsled track. Slamming between the walls left the car bruised and battered, while at one stage it very nearly rolls completely over – scary. Luckily, the otherwise stock WRX STI had been fitted with a roll cage and extra body strengthening by motorsport experts Prodrive. 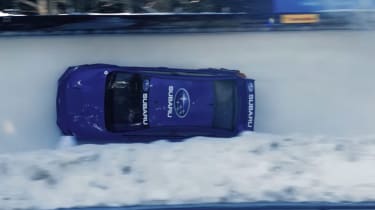 It’s unlikely that car-bobsled will catch on, though. The WRX STI finished having not only battered itself, but taken great chunks of the course with it. Higgins wasn’t unscathed, either. “I think,” he told Caranddriver, “I’m gonna have a sore neck tomorrow.”

Check out the video above to see the rest of Higgins’ insane run down the St Moritz bobsled course. And remember – though we shouldn’t have to tell you – don’t try this at home!