Pricing for Subaru’s latest STI, the S209 has been revealed - but it’s only for American consumption 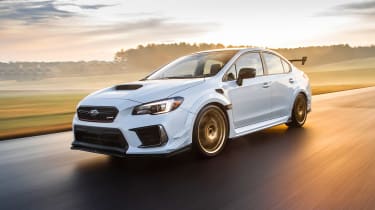 Following its reveal earlier this year at the Detroit motor show, Subaru has announced pricing for its limited-edition WRX STI S209. This is the first ‘S-line’ STI model (not to be confused with Audi S-Line trim level) to be sold outside of Japan, and is full of bespoke performance parts and tuning elements inspired by Subaru’s WRX STI Nurburgring Challenge race car. The US-only model starts from a rather steep $63,995 (approx. £50,000), more than the entry-level C8 Corvette.

The S209 is also the first international-market Subaru to be assembled at Subaru Tecnica International’s facility in Kiryu, Japan, making the new S209 quite special - even in a sea of special and limited edition STI models produced over the best part of the last 20 years.

Unfortunately the manic, high-revving ‘EJ20’ engine that has featured in all JDM S-line models so far hasn’t made it to the S209, instead the car utilises a heavily modified version of the 2.5-litre ‘EJ25’ flat-four engine. In this guise it produces an estimated 336bhp - 31bhp up on the US market STI and 40bhp up on the STI Final Edition that was sold in the UK last year. STI has had to work hard to achieve these numbers - this is no simple ECU remap.

Starting with the engine’s internals, STI has fitted new forged pistons and connecting rods, and redesigned the intake. It also fitted larger injectors and a more effective fuel pump to get more air and fuel into the cylinders. 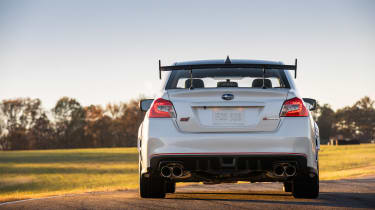 The turbo itself is new as well, designed and manufactured by HKS specifically for STI. The new unit has an eight per cent larger turbine, and six per cent larger compressor, and runs at a higher 18psi boost pressure (the standard STI runs 16.2psi). To keep the internals cool, a water-spray system, controlled via a paddle behind the steering wheel helps cool the larger intercooler.

Power is then sent through a short-throw six-speed manual gearbox to Subaru’s traditional all-wheel drive system. The S209’s front and rear axles are 15mm wider, and fitted with electronically controlled locking differentials as well as an active centre differential, varying torque split between the wheels depending on the driver-mode selected on the centre console. The S209 also features power torque vectoring, which is again driven by the selected driver mode and data collected from the two axle-mounted differentials. The system can ascertain which of the four wheels is able to most effectively utilise the available power, distributing drive accordingly. 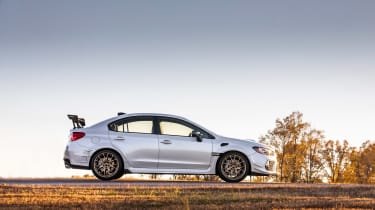 The STI S209’s bodywork is 48mm wider than standard, with stiffening beam cross members fitted underneath and a pillow-joint strut bar across the front axle which is longitudinally flexible but completely stiff laterally to improve the minute front suspension geometry without compromising suppleness. This is technology that’s been directly transferred from Subaru’s motorsport division. Beyond that, bespoke Bilstein dampers and stiffer springs complete the chassis tweaks, in the process creating one of the most thoroughly reworked limited edition Subaru STIs yet.

Outside, the S209 has also picked up a raft of new aesthetic upgrades, from the widened arch extensions, stacked rear wing and front-mounted canards, you won’t miss an S209 coming up behind you. The interior is perhaps not as stripped out as you might expect mind, with lots of bespoke trim and not much in the way of lightweight-components, but then this is a US-market only model. A maximum of 200 cars will be built, with no word on local pricing yet.

With Subaru having now ended the import of WRX STI models, the S209 is off the wishlist for the UK. Cars like the STI might be considered out-of-date, especially with supermarket hot hatchbacks now regularly stepping over the 300bhp mark, but Subaru itself has never been so profitable thanks to huge market gains in the US and Australia. Will the STI brand experience a hybrid-powered renaissance in the UK in future? It might not be as unlikely as you might think. 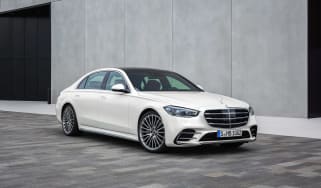