Jaguar's XE SV Project 8 takes a rather more extreme approach to the super saloon recipe than most, but has an equally extreme price tag to match 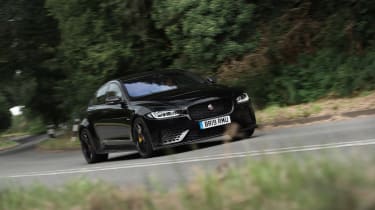 Both Project 8 and Project 8 Touring use the most potent development of Jaguar Land Rover’s 5-litre supercharged V8. How potent? Try 592bhp at 6500rpm, and 516lb ft of torque at 3500rpm.

Containing that power is an all-wheel drive system. Disappointed? Well, much as rear-wheel drive might have been amusing, it’d also have turned the rear tyres into vapour rather than traction. In normal conditions there’s a sensible 50/50 torque split front to rear, but the set-up can still send up to 100 per cent of the engine’s torque to the rear wheels alone in certain circumstances.

The standard and sole transmission is the usual eight-speed automatic, which has been adapted to suit the Project 8’s performance, and delivers quicker shifts than elsewhere in the JLR range. Controlling it is an F-type-style pistol-grip lever and a pair of paddles behind the steering-wheel spokes.

It only takes a glance to notice the visual changes between the XE and the Project 8, and only the roof and front door skins are shared between the two variants. Like the XE there’s an aluminium substructure, while the aforementioned panels are also aluminium, but everything else – bonnet, bootlid, front and rear wings, bumpers – is carbonfibre, in an effort to shed weight. At 1745kg at its very lightest, it’s lighter than, say, a BMW M5, but far from the 1620kg of the less exotically constructed Alfa Romeo Giulia Quadrifoglio.

The body kit does at least reduce aerodynamic lift – to the tune of 206 per cent compared to the standard XE – and a wider track (by 24mm up front and 73mm behind) improves stability further. Suspension is double wishbone at both ends, but beefed up for the Project 8 with stiffer bushes, ball joints and thicker anti-roll bars. 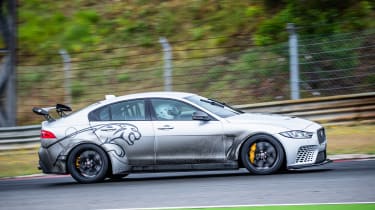